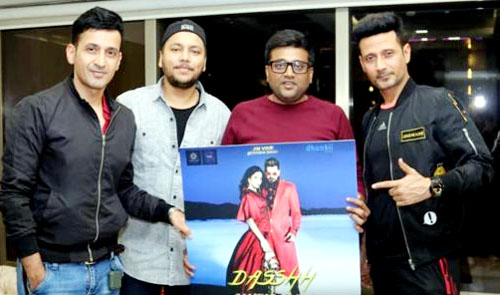 Photographer turned Director Manoj Jain a celebrated fashion photograper, marked his debut with a music video titled 'Dasshh' in collaboration with Meet Bros, which is produced by Blue Square & Sarika Jain and will release digitally under the label of Dhunki Beats. Music given by Turban beats, the single is an up-beat punjabi song, composed by Harry Kahlon, sung by Jim Virr and Directed by Manoj Jain & Aaditya Shah. Aaditya has 5 years of experience, and has done music videos , television, commercials, corporate videos, film , digital videos , television , web series.

*Talking about his experience, and for his debut, Manoj said,* I have been in this industry for sometime now, I've clicked so many Industry personalities for commercials, for portfolio etc for a long time now and making this transition has been a fulfilling experience.

I always wanted to go in Direction but life had other plans, while I love photography but directing is my passion and that's why I said yes for Dasshh, it's an excellent combination of a Punjabi up-beat song with a touch of strength in it. Jim Virr & Super model Deeksha have done an amazing job. Jim has done both sung & acted in the song, his voice gives an finishing touch to the song and Super model Deeksha is the heart of it. I'm glad to have worked with this wonderful people. I hope people enjoy and love this song.

Song has been shoot in exotic location in india n abroad