Pink-ball Test: Both pacers & spinners will be in action at Motera, feels Kohli 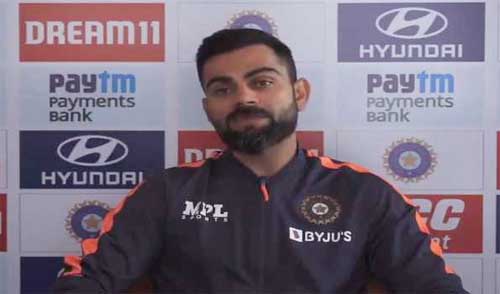 Ahmedabad,(UNI) India captain Virat Kohli on Tuesday said that both spinners and fast bowlers will be in play in the day-night third Test at the revamped Motera Cricket Stadium here, even though the conditions underfoot are expected to assist spin bowling.
Addressing the pre-match press conference, Kohli said he expects the pacers to be in the game till the ball is 'nice and shiny'.
"The pink ball does tend to swing a lot more than the normal red ball that we play with. We experienced that in the one match that we played in 2019 against Bangladesh. It is much more challenging to play the new pink ball regardless of the pitch you are playing on,' Kohli said, on the eve of the Ahmedabad Test.
'Especially in the evening, say, as a batting team, you are starting your innings in the evening under lights, then that one-and-a-half hours is very challenging.
'Yes, spin will come in for sure, but I don't think the new ball and the fast bowlers can be ignored. The pink ball does bring them into the game till the ball is nice and shiny. Something we are very well aware of, and we are preparing accordingly," he added.
India have played only two pink-ball Tests so far, winning at home against Bangaldesh in 2019 and losing badly against Australia in Adelaide.
Talking about the experiences from the two matches, Kohli said the first session of the day was the easiest to bat in.
'Last time, we experienced that the first session is probably the nicest to bat when the Sun is out and ball doesn't do much. But when it starts to get dark, especially during that Twilight, it gets very tricky.
'The light changes, it's difficult to see the ball and then under lights, it is like playing the first session in the morning. In a normal Test match, the ball does tend to swing a lot (in morning). So, I think it's a reversal of roles and something that you need to adjust to quite quickly,' he explained.
The day-night Test, though, has major implications for both the teams. For England, this match is all or nothing. They must win this Test and the following one. Only a 3-1 series win can see them go through to the final.
On the other hand, India need to win the series 2-1 or 3-1 to qualify for the WTC final and a draw in the final game will be enough if the hosts win the day-nighter here. However, Indian capatin doesn't want to think that far ahead.
"You can't play for those kind of reasons [the qualification permutations]. We are not looking to win one and draw one. We are looking to win both. For us, these are two games of cricket, and the only thing we are focused on. What it does afterwards, is a conversation for later,' said Kohli