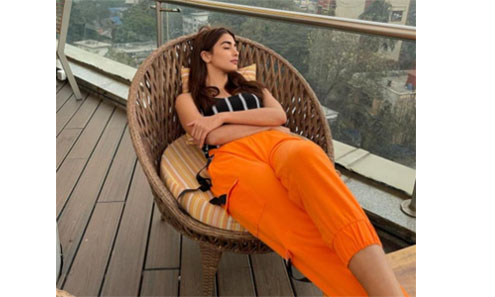 Pooja Hegde has been busy with her projects since last year and continues to do so even now. The actress has some amazing projects lined up in her kitty for which she has been preparing. We can take the example of Radhe Shyam here whose official teaser was recently dropped on social media. The actress had shared a picture of herself a few days ago as she finished the dubbing session for the same. Meanwhile, she is back on social media again.

Pooja has shared a candid picture in which she can be seen dozing off while enjoying a view from her plush balcony. Seated comfortably, the actress takes her afternoon nap while keeping aside her busy schedule for once. Talking about the same, she writes in her caption, Just me, succumbing to the afternoon nap. The South star is wearing a black and white striped top teamed up with a pair of yellow joggers as can be seen in the picture.

As has been mentioned above, Pooja Hegde will be seen in Radhe Shyam opposite Prabhas. Its teaser has been released recently and has received a humongous response from the audience. It is slated to release on July 30, 2021. Apart from that, she is also awaiting the release of Most Eligible Bachelor which features Akhil Akkineni. Pooja is a part of the Bollywood movie Cirkus which also stars Ranveer Singh, Jacqueline Fernandez, and Varun Sharma in the lead roles.