Power supply, mobile networks to be restored in flood-ravaged areas 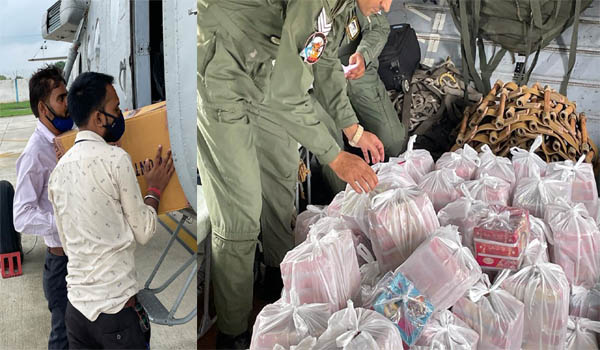 Bhopal: Chief Minister Shri Shivraj Singh Chouhan has said that we will take a sigh of relief only after normalcy is restored in the areas affected by excessive rainfall and flood situation. The state government is with every flood affected in this hour of crisis. In the villages, till the situation of preparing food in the homes is not created, effective arrangement of food supply should be ensured. 50 kg wheat should be provided to each affected family immediately. Top priority should be given to restoration of power system and re-establishment of mobile networks.

Relief and rescue work continues: It was informed in the video conference that 3 teams each of NDERF are engaged in rescue and relief works in Shivpuri, Morena and Bhind respectively. 5 helicopters of the Air Force are also operational. Rescue operations are on from the boats. In the rescue work that started at 5.30 am today, 221 people were evacuated to a safe place. NDERF, SDERF, BSF are also engaged in continuous rescue work in the districts.

More destruction in Sheopur: Chouhan said that there has been a lot of destruction in Sheopur. People need help. Gwalior and Morena Collectors should provide all possible help in re-establishing the arrangements in Sheopur and providing food, drinking water, medicines and other necessary relief to the general public. It should be ensured to send dry food items every two hours.

FIR should be lodged against those spreading rumors: Home Minister Dr. Narottam Mishra said that due to the rumours of dam breaking in the area, an atmosphere of panic and stampede is created among the people. Necessary measures should be taken to control rumours. F.I.R. should be registered against those spreading rumours. Chief Minister Shri Chouhan also inquired about the status of Kota barrage, the water being released from the dam and its possible impact on Bhind and Morena.

Infra destroyed by floods to be restored immediately: Chouhan has said that all possible help will be provided to the district administration immediately to evacuate the people safely from the areas affected by excessive rains and floods. Saving life is the top priority. Along with the district administration, SDREF, NDREF, BSF, Army and Air Force are engaged in rescue and relief works. All possible cooperation is being received from the Army and the Central Government without any delay.

Woman home guard performed delivery: Chouhan took district-wise information about relief and rescue operations from the Collectors and SPs of Sheopur, Shivpuri, Gwalior, Datia, Guna, Bhind and Morena. Collector Sheopur said that the communication network in the district has collapsed. All communication networks are down. A large number of women home guards have been deployed in relief operations in Sheopur. During the rescue, the delivery of a woman in Plod village was performed by the female home guard when she was in labour pain; both the mother and the child are healthy.