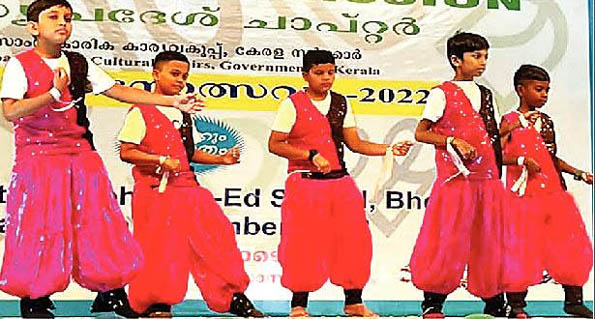 Bhopal: Malayalm Mission is a project launched by the Government of Kerala to provide mother tongue learning opportunities to Malayalees around the world. It is an initiative by the Kerala Government to foster the creative talents of the children of non-resident Malayalees and inculcate in them a passion for the language and patriotism.
United Malayalee Association in association with Malayalam Mission has taken the initiative to take the Malayalam classes for both kids and adults in both online & offline mode. We have more than 350 students registered with us in Bhopal alone and we are planning to expand the classes in different cities of M.P. where Malayalee population is there.
Malayalam Mission Director Shri Murukan Kattakada, a renowned Malayalam Poet and Litterateur arrived in Bhopal to participate in the event as the Chief Guest. He emphasized the importance of learning one’s Mother tongue. Kerala Government has made mandatory to hold proficiency in Malyalam language for entry in government jobs. He also recited some of his famous poems with the audience. He has written several poems and songs in Malayalam and many of them have become very popular among all age group of people. Shri Babu Edakunni, famous sand artist was present at the event who said that art is an outcome of imagination and thoughts, and everyone has ability to create it. Stating that he thought of doing something which people have not tried so far and started to make portrait in sand, which has created new dimension in the field of art.
The program was held at St. Joseph’s Co-Ed School , Arera Colony, on 20th November’22. There was a host of cultural and artistic prowess by the students and teachers. Praveshanotsavam is the beginning of new batch of students and it is also a platform to all the talented students of Malayalam Mission to showcase their talents. Various items like skit, songs, dance, one act play, poem etc. were performed by more 50 students. The students who won in various competitions were awarded certificates in the event.
United Malayalee Association conducts Malayalam language classes in association with Malayalam Mission, which is under the Department of Cultural Affairs, Govt. of Kerala. Praveshanotsavam means the beginning of new session for the students who enrolled to learn Malayalam language. The course is open to all age groups and to all who wish to learn Malayalam.
In Bhopal the course was started in 2020 and more students are joining to learn the language every year. Students have shown exceptional results by attending the course. Malayalam Mission MP Chapter started the Malayalam classes in Bhopal in August 2020 and is getting encouraging results. O.D. Joseph, President of United Malayalee Association said that one’s mathrubasha is very close to one’s heart and every effort should be made to preserve and promote it. K.P. Das, General Secretary, said that we are planning to expand it to other parts of the state so that new generation can learn the language which helps in maintaining our culture and richness of the language is not lost. P.T. Dineshan, Chief Coordinator read out the report of the activities conducted by the Malayalam Mission, M.P. Chapter. Manoj Kumar, S. Gopakumar, Byju P George, Ms Arya Nandakumr and others were also present in the meet.