Premchand and Amarendradhari of RJD file nominations for Rajya Sabha 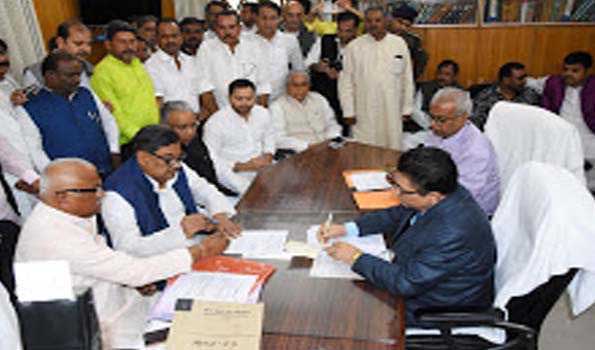 Patna, Former Union Minister and Rashtriya Janata Dal (RJD) leader Premchand Gupta and a social activist Amarendradhari Singh filed their nominations as RJD candidate for Rajya Sabha elections here today.Both Mr Gupta and Mr Singh filed the nomination papers before Bihar Assembly Secretary cum returning officer B. N. Pandey. The leader of opposition in the state assembly Tejasvi Prasad Yadav, RJD state president Jagdanand Singh, several MLAs and MLCs of the party accompanied both the candidates for filing the nomination papers.Earlier, Mr Jagdanand Singh announced the names of Mr Gupta and Mr Singh at a press conference during the day. While making the announcement he said that the party unanimously decided the names during a meeting of the core committee of the party.The last date for filing nomination is March 13 and the nomination papers would be scrutinized on April 16. The nomination can be withdrawn by March 18 and if required voting would taken place on March 26. The results would be announced the same day.