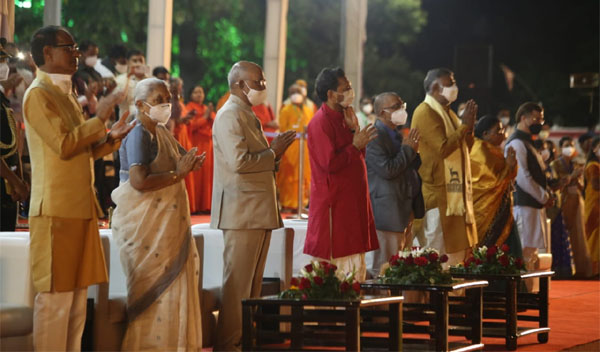 Chronicle Reporter, Bhopal-President Ram Nath Kovind took part in the Maha Arti of Maa Narmada at Gwarighat in Jabalpur. He performed puja-archana of Maa Narmada in the presence of priests with complete rituals amidst the echoes of Swastivachan, Har-har Narmade and Narmadashtakam shlokas.

Awed by religious fervour and spirituality, President Kovind was overwhelmed by the greatness of Maa Narmada. He witnessed the supernatural beauty of the Narmada at Gwarighat. Later, he also had darshan of Maa Narmada arti from the semi-crescent stage amidst the view of a Dev-Deepawali.

Minister of State AYUSH (Independent Charge) Water Resources Ramkishore Kanvare, MLAs, religious leaders, saints and seers were present in the grand aarti of Maa Narmada. The entire arrangement of the Maa Narmada Maha Arti organized under the aegis of the Ministry of Culture of the central government was made under the supervision of Union Minister of State (Independent Charge) for Tourism and Culture, Prahlad Singh Patel.