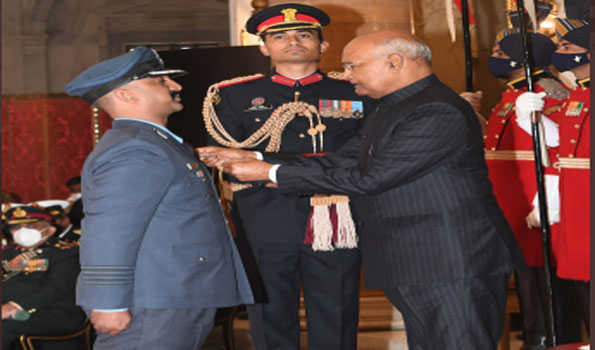 He was awarded for his role in shooting down the Pakistani F-16 fighter aircraft by his MiG-21 Bison on February 27, 2019 in an aerial dog fight.

The dogfight took place a day after the IAF’s Mirage-2000s struck targets Pakistan’s Balakot in response to the Pulwama terror attack in Kashmir on February 14, 2019.

President Kovind accorded the second-highest peacetime gallantry award Kirti Chakra (posthumously) to Sapper Prakash Jadhav for neutralising terrorists in an operation in Jammu and Kashmir. His wife and mother received the award.

Major Vibhuti Shankar Dhoundiyal also received the Shaurya Chakra (posthumously) for his role in an operation where five terrorists were eliminated and a huge quantity of explosive material was recovered.

His wife Lt Nitika Kaul and mother received the award at Rashtrapati Bhavan.

Naib Subedar Sombir accorded the Shaurya Chakra (posthumously) for killing an A++ category terrorist during an operation in Jammu and Kashmir. His wife Suman Devi and mother Rajendra Devi received the award.

He was among the army men who died while fighting terrorists in Jammu and Kashmir in February 2019.