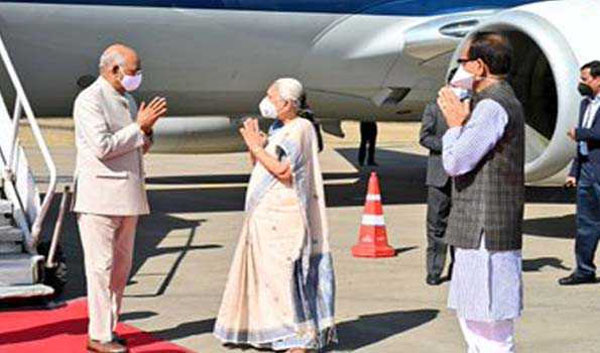 Jabalpur, Mar 6 (UNI) President Ram Nath Kovind arrived here by a special plane this morning on a two-day visit.
Mr Kovind will inaugurate a two-day symposium being hosted by Judicial Academy of Madhya Pradesh here.
He arrived at the Dumna airport at 0930 hrs where he was received by Governor Anandiben Patel and Chief Minister Shivraj Singh Chauhan.
Union Minister of State for Culture and Tourism Prahlad Patel, Chief Justice of Madhya Pradesh High Court Mohammad Rafique, Minister of State for AYUSH and Water Resources Ramkishore Kanvera, Administrative Judge of Jabalpur Principal Bench of Madhya Pradesh High Court Prakash Shrivastava were also present on the occasion.
The President left for the Circuit House directly from the airport. After this, he will leave for Manas Bhawan to inaugurate the symposium of the State Judicial Academy.
After the inauguration, he will come back to the Circuit House before heading to the Narmada river in Gwarighat for the Maha aarti at 1830 hrs. He will then attend a cultural programme and dinner at the High Court and return to the Circuit House.
Tomorrow morning, after a short visit to Damoh, the President will return to the National Capital at 0150 hrs.