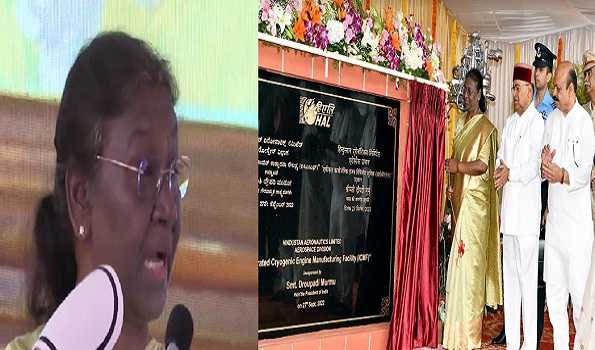 She also laid the foundation stone for the Zonal Institute of Virology (South Zone) virtually.

Addressing the gathering, the President said the inauguration was indeed a historic moment not only for HAL and the Indian Space Research Organisation (ISRO) but also for the whole country to have a state-of-the-art facility to manufacture cryogenic and semi-cryogenic engines.

She said that HAL had contributed immensely to India’s self reliance in the defence sector. HAL has time and again demonstrated its capabilities in research, development and manufacturing of various aircraft platforms, she said.

The President described ISRO as the pride of the nation. When it started operations in the 1960s, India was still a young Republic, facing challenges of severe poverty and illiteracy.

The rapid pace with which ISRO has grown caught the attention of even the most advanced and technologically developed countries. Sincere efforts and dedication of ISRO scientists have made India the sixth country in the world to have cryogenic engine manufacturing capabilities.

The HAL with its high end facility of manufacturing defence related equipment has proved to be an invaluable asset for the country, she said.

"By 2047, when we will celebrate the 100 years of Independence, the world around us will have changed drastically. Just as we were in no position 25 years ago to imagine the contemporary world, we cannot visualise today how Artificial Intelligence and automation are going to transform life.

"We are looking ahead at the next 25 years as the period to re-imagine India and make it a developed country. It is our joint responsibility to ensure that the India of 2047 will be a much more prosperous and strong nation," she said.

Speaking about the Covid pandemic, the President said the resilience and extraordinary effort of doctors and scientists helped the country to deal with the crisis.

She noted that the Indian Council of Medical Research has provided exemplary support for effective Covid-19 management and was expanding its research infrastructure.

The National Institute of Virology, Pune, was also taking all possible steps to increase R&D in the field of virology.