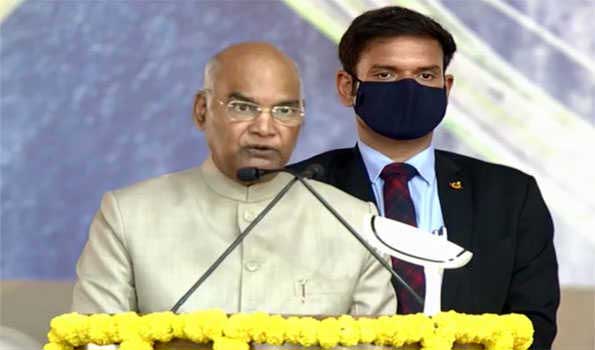 Ahmedabad, Feb 24 (UNI) President Ram Nath Kovind on Wednesday inaugurated the world's largest cricket arena here, the revamped Sardar Patel Stadium, which will now be known as Narendra Modi stadium - renamed after the country's Prime Minister, hours before its inaugural international match between India and England.
The state-of-the-art facility can accommodate an awe-inspiring 1.32 lakh spectators. The stadium was the pet project of Modi who was chief minister in Gujarat state, where Ahmedabad is the main city, before becoming Prime Minister in 2014.
'This stadium was conceptualised by Prime Minister Narendra Modi when he was Chief Minister of Gujarat. He was president of the Gujarat Cricket Association at that time,' Kovind said in his address after the inauguration.
'This stadium is an example of eco-friendly development,' he added.
The President inaugurated the stadium in the presence of Home Minister Amit Shah, BCCI secretary Jay Shah and Sports Minister Kiren Rijiju among a host of other dignitaries.
BCCI President Sourav Ganguly, who underwent two sets of angioplasty last month, was not able to be a part of the inauguration ceremony.
'We have decided to name it after the country's Prime Minister. It was Modi ji's dream project,' said Shah after the inauguration.
The President also performed the ground-breaking ceremony for a sports complex in the stadium, to be named Sardar Vallabhbhai Patel sports enclave, for disciplines like football, hockey, basketball, kabbadi, boxing, and lawn tennis among others.
'I am confident that this enclave will give a new global identity to Ahmedabad in terms of world-class sports infrastructure,' Kovind said.
Apart from hosting, the third Test between India and England, the stadium will also host the fourth and final game of the series from March 4.