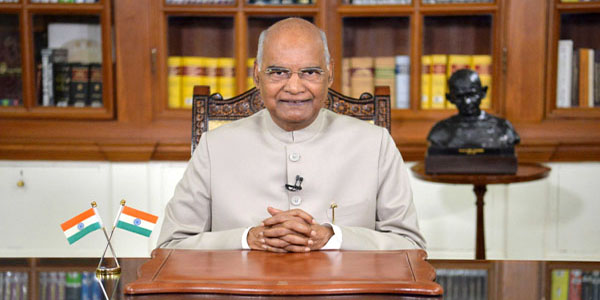 New Delhi, (UNI) President Ram Nath Kovind on Saturday said India was looking at the current Coronavirus pandemic as an opportunity to initiate reforms to revitalise the economy and its success in containing the magnitude of the disease and saving a large number of lives was worth emulating by the wider world.

In his address to the nation on the eve of India's 74th Independence Day, he noted that "For a country so vast and diverse with high population density, meeting this challenge requires super-human efforts." While all state governments took measures, the people also supported whole-heartedly. "With our committed efforts, we have succeeded in containing the magnitude of the pandemic and saving a large number of lives. This is worth emulating by the wider world," he said.

Dwelling on the lessons learnt from the Coronavirus outbreak, Mr Kovind said, "We have looked at the current crisis as an opportunity to initiate reforms to revitalise the economy for the benefit of all, specially farmers and small entrepreneurs" through landmark reforms in agriculture sector, barrier-free trade for farmers and to get the best price for their produce anywhere in the country. The Essential Commodities Act has been amended and this would help raise farmers’ income.

Stating that the poor and daily wage-earners were the worst hit by the pandemic, the President referred to the Government's efforts to supplement through welfare interventions by introducing 'Pradhan Mantri Garib Kalyan Yojana' enabling crores of people to earn their livelihood and mitigate the impact of job-loss, dislocation and disruption caused by the pandemic.

The Government, he said, continues to extend its helping hand through a number of initiatives, supported whole-heartedly by the corporate sector, civil society and citizens.

The needy were being given free food grains, so that no family went hungry, he said, adding that the largest free food distribution programme in the world has been extended till November-end to provide succour to about 80 crore people every month and so that migratory ration card holders got ration anywhere in the country, all states were being brought under the coverage of ‘One Nation - One Ration Card’ scheme.

Mr Kovind also mentioned about reaching out to Indians stranded anywhere in the world, saying "The Government has brought back more than 10 lakh Indians under the ‘Vande Bharat Mission’. Indian Railways has been operating train services, in these challenging circumstances, to facilitate travel and transportation of people and goods."

Dwelling on India's reaching out to help other countries in their fight against Covid, he said, "Responding to calls from countries for supply of medicines, India has once again shown that it stands by the global community in times of distress. We have been at the forefront in evolving regional and global strategies for an effective response to the pandemic." The overwhelming support India got at the elections for the non-permanent seat of the United Nations Security Council was a testimony to the goodwill enjoyed by the country internationally.