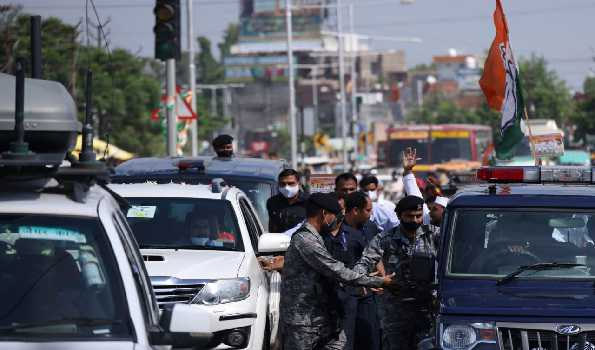 Lucknow, Sep 12 (UNI) After her three days stay in Lucknow, Congress general secretary and incharge of Uttar Pradesh Priyanka Gandhi Vadra left for her mother Sonia Gandhi's parliamentary constituency Rae Bareli on Sunday morning.
The Congress leaders of both Lucknow and Rae Bareli have made elaborate arrangements to welcome Priyanka at different places in the 80 kilometers long way, party leaders here said.
During her 3 days stay in Lucknow, Priyanka held marathon meetings with office bearers of all 8 zones and other members of different committees.
Last night her meeting ended with discussion with the UP Congress Core committee.
The meetings were held in view of the party's Mission 2022 with ticket seekers for assembly polls having been asked to submit their bio data by September 25 to the state party office or at the district.
Meanwhile a report from Rae Bareli said Ms Priyanka Gandhi Vadra will be in the district for two days and could also pay a visit to the adjoining Amethi.
She will be welcomed from Churuva border(Lucknow-RaeBareli border) to Bhumau guest house.
At the Bhumau guest house, Priyanka will hold a meeting in the District Congress Committee followed by a meeting with Block Presidents and Nyaya Panchayat Presidents.
She will also hold meetings with city congress presidents along with City Congress Committee members and Ward Presidents.
During her 2 days stay , she will also meet with the Head of the Frontal Department, Cells, former MLA, former candidate, senior leaders, and members of District Panchayat.
Priyanka Gandhi will stay overnight in Rae Bareli On September 13, she will hold a Janta Darbar to hear the problems of the common people and party workers of her mother's constituency at the Bhumau guest house.