Priyanka reaches Lucknow for Mission UP 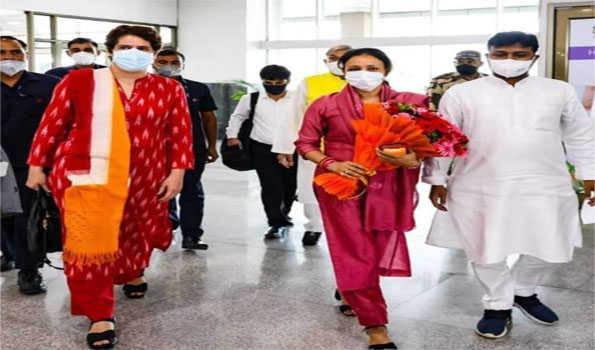 Lucknow, Sep 9(UNI) Congress general secretary and Uttar Pradesh in-charge Priyanka Gandhi Vadra reached Lucknow on Thursday on a three days visit to review the party's Mission 2022 assembly polls preparation.
At the Choudhury Charan Singh international airport here, Ms Vadra made it clear that she will meet the party workers and hold meetings with the leaders during her 3 days stay in the state capital.
Several senior party leaders were present at the airport to welcome Ms Vadra.
Party leaders here said that during her visit, Ms Vadra will hold several important meetings with party leaders and office-bearers on September 10 and 11.
She will also take stock of the preparations made so far and also strategise for the 2022 UP polls keeping caste and political equations in mind.
Ms Vadra will also give her approval on the first list of party candidates for the assemly polls.
Giving more information, UP Congress chief Ajay Kumar Lallu said, “Priyanka Gandhi Vadra will stay at a private residence located on Gokhale Marg in Lucknow. On September 10, at 10 am at the Congress headquarters, she will first hold a meeting with the Advisory and Strategy Committee of the UP Congress, after which she will chair a meeting with the Congress State Election Committee and after this she will hold a zone-wise meeting.”
The AICC general secretary will also review the work done so far on the ground to strengthen the Congress party in the state. On the other hand, keeping in mind the political and caste equations of Uttar Pradesh in the upcoming assembly elections, selection of the candidates and the announcement of their names may also be done.
According to the Congress sources, Priyanka Gandhi will review the Congress campaign in every village in the zone-wise meeting to be held in the capital Lucknow. Due to which the officials associated with each zone have been instructed to reach there with written information about the work done in the zone.
During this, Gandhi will do a detailed review of the formation of Gram Sabha Presidents along with the Congress Block and Nyaya Panchayat Samiti formed in every zone. Feedback of training camps will also be taken.
In order to create an atmosphere in favour of Congress in Uttar Pradesh, Ms Vadra will also formalise a strategy to take issues to the people like failures of the Yogi-Modi government along with the new agricultural law, farming, unemployment, law and order, corruption and inflation.
A conference of businesspersons is likely to be organised at the Congress headquarters during the visit of Ms Vadra who may also visit nearby districts like Rae Bareli.