Priyanka to go for marathon meeting in UP, set up war rooms in 100 Assembly segments 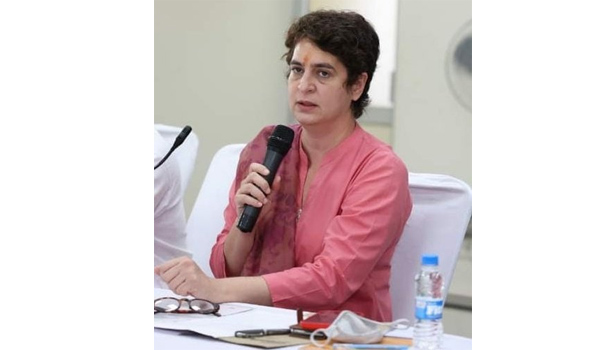 Lucknow, Sep 28(UNI) Congress general secretary Priyanka Gandhi Vadra, who is on a three days visit to Uttar Pradesh, will commence her marathon meeting with the party leaders and members of different committees at the state party headquarters, here on Tuesday.

The Congress general secretary has already given her nod for the setting up of war rooms in 100 assembly segments for the upcoming UP polls.
Ms Vadra reached Lucknow on Monday afternoon and was busy in chalking out preparations for the coming assembly election 2022 at the Kaul House.
State present Ajay Kumar Lallu and legislature party leader Aradhana Mishra remained with Priyanka till late night on Monday to prepare the programmes of the party for the coming days.
Party sources here told UNI on Tuesday that during the 2 days meeting, strategy will be decided about the route and issues of the proposed 'Pratigya yatra' by the party before the assembly polls.
The Congress General Secretary will follow up on election preparations and will hold meetings with the office bearers of the organization and foot soldiers.
Sources said Ms Vadra will also meet several senior party leaders in one-to-one meetings, including the party candidates for the UP assembly election.
This is her second visit to Lucknow in the month of September.
After Tuesday and Wednesday's meetings in Lucknow, Ms Vadra will be visiting Rae Bareli and Amethi.
Earlier, the Uttar Pradesh Congress in charge concluded her 5-day visit to the state on September 13.
The UP Congress has already extended the date for submission of assembly candidate forms along with Rs 11,500 as fee till October 10.
The party had also announced to take out rath yatras with the name 'Hum Vachan Nibhayenge', which will cover 12,000 kilometers and will touch almost all the 403 assembly segments .
Earlier Priyanka Gandhi Vadra was slated to launch these yatras in September but due to Pitrapaksh it has been postponed till the first week of October.