Priyanka's trump card: 40% seats to women in UP polls 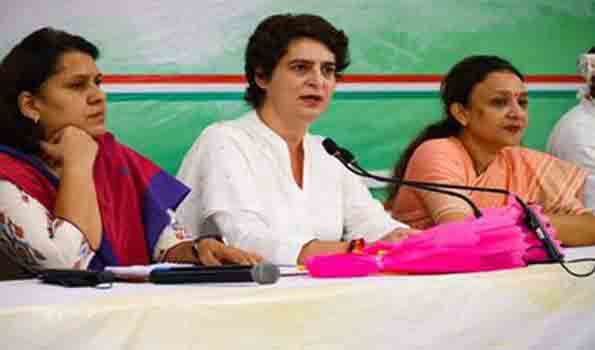 Lucknow , Oct 19(UNI) Claiming to bring about historical change to counter the politics of caste and religion in the country, Congress general secretary and in charge of Uttar Pradesh Priyanka Gandhi Vadra on Tuesday announced that the party will give 40 per cent tickets to the women candidates in the upcoming UP assembly polls next year to boost women empowerment in the state.

" I wanted to give 50 per cent tickets to women but consensus was reached at 40 per cent ticket to women candidates in the upcoming UP polls. Now it will be showcased in national politics too and if other states like Punjab and others want to give it they are free to adopt this policy," Priyanka announced in a press conference here where the banner also read," Ladki Hu, Larh Sakti Hu".

She said that Congress was determined to change the narrative of the politics in the county by pushing back the caste and religion system in politics by giving women and dalits their rights in politics. "Women have courage, determination, emotions and strength to change the society and take forward the state and the country. They just want an opportunity and chance, which will be given to them by the Congress this time in UP," she said.

"I am confident that this new Congress strategy will force the opposition parties to rethink their casteist and communal approach during the elections, which will certainly change the poll aspect of the entire country," she said.

However, Priyanka made it clear that the selection of the women candidates would be done purely on merit and there is no objection if she belongs to any political family. She also appealed to the women interested in politics to fill the application for contesting the assembly polls till November 15, the last date for filing of nominations.

The Congress general secretary also said that the party has not decided yet on the 'face' under which the Congress will contest the polls in UP and other issues connected with the upcoming assembly polls in the state.

On the occasion, Priyanka also hit out at the opposition, particularly the BJP saying that they should now stop terming her as a tourist. "I am staying in Lucknow and working for the people, how can you term me as a tourist," she said.

Giving reasons for taking the decision to give 40 per cent tickets to women in the UP polls, Priyanka said since 2019 during her visit to several places and her Ganga Yatra, girls and women have made several demands for education, jobs and other things. During my visit to Allahabad University a girl student said how the rules of the hostel was different for girls and boys; during Ganga Yatra, in Prayagraj, a small girl Paro wanted to become a political leader; in Chandauli, one Vaishnavi, sister of a martyr, wanted to become a pilot, in Unnao and Hathras, family members of girls wanted justice against crime against their daughters and in Lakhimpur Kheri a girl wanted to become PM," she said. She further said that in Sitapur during her detention, a couple of police women worked tirelessly, which shows their determination and courage.

"Everyone knows very well how the dreams of girls and women are crushed and now we just want to change this situation and empower women to achieve their dreams," she said.

During the press meet, Priyanka refused to take any question other than about her new announcement on women empowerment but assured that in the coming days she will make more announcements for the UP polls.