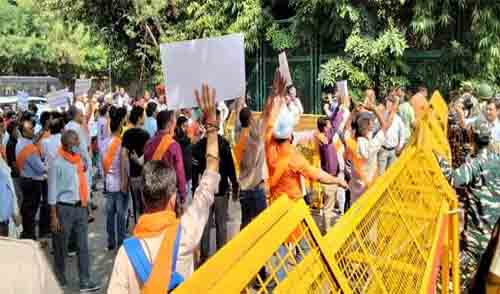 “We are protesting against the communal violence with Hindu families and several temples were vandalized in Bangladesh during the Durga Puja festival which was celebrated last week,” said Surendra Kumar Jain, Joint General Secretary, Vishwa Hindu Parishad.

A VHP delegation of four members met the Bangladesh High Commission officials and handed over a memorandum urging Bangladesh Prime Minister Sheikh Hasina to protect the Hindu families, and asking for rebuilding of vandalized temples and compensation for victim families.

“We have demanded for a high-level inquiry commission led by a retired Chief Justice of Bangladesh be be set up and probe the attacks on Hindu minorities. Safety, security and suitable compensation be given to the victim Hindu families for loss of life and property," Jain added.

The VHP said hundreds of houses and shops of Hindus have been attacked and looted. More than 1,000 Hindus have been injured and till now 12 Hindus were reportedly killed in Bangladesh violence.

VHP members also urged the Indian government to form a delegation of Member of Parliaments and visit Bangladesh to take stock of the condition of Hindu victims. The victims need our moral support during this hard time which they have been facing, they said.

The recent heinous incidences of persistent attacks on Hindus, Durga Puja Pandals, temples, religious symbols, women and children in many parts of Bangladesh came after the alleged desecration of the Holy Quran at one of the puja venues.

The attacks have shaken the Hindu community across the globe, particularly in India, VHP members said.