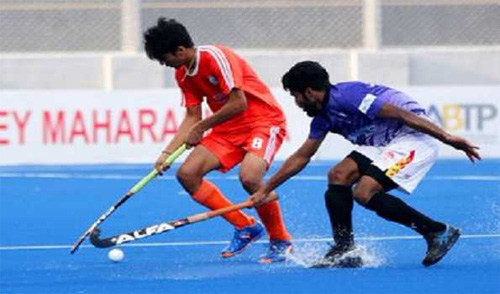 The first half ended goalless in a closely contested final between the two heavyweights. The deadlock continued in the second half as well, with neither of the teams coming close to scoring in the regulation time.

Punjab goalkeeper Kamalbir Singh emerged as the hero of the match, making as many as four saves in the shoot-out to help his team clinch the title.

Talking about his team's victory, Punjab coach Balwinder Singh said," As I had mentioned earlier, are as many as 10 players were playing the Nationals for the first time, so this win shows how talented this group is."

"We expected this kind of challenge in the final, our boys showed great character today.

"The team was led by Rupinder Pal Singh, hence we were confident in defence. Our goalkeeper Kamalbir Singh stood tall and made excellent saves in the shootout. So, it was a great game and really happy to be on the winning side."

"I had taken a risk of selecting a young side, and I think I have got my reward.

"Winning a national championship is a great achievement for a coach, and of course for players as well.

"It will be a stepping stone for these young players to achieve their dream of playing for the country," the coach added.

Meanwhile, Karnataka defeated Maharashtra 5-2 to finish third in the tournament.

Not giving up easily, Maharastra went on to equalise through two goals from their Captain Taleb Shah in the 24th and 33rd minute respectively.

However, it wasn't enough as goals from Pavan Madivalar (37') and Chiranth Somanna N.D (45') put Karnataka in the driver's seat at the end of the third quarter.