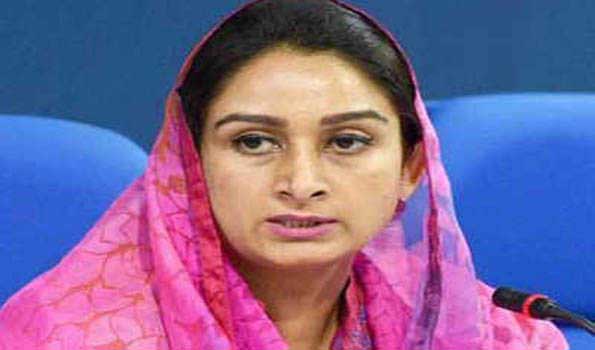 Chandigarh, Exhorting Punjab Chief Minister Capt Amarinder Singh to bestow 'serious attention' to the Ladhowal mega food park project for its early completion, Union Food Processing Minister Harsimrat Kaur Badal on Wednesday accused the state government of being lethargic which delayed the project by two years.In a letter to the Chief Minister, the Union minister said the mega food park was approved by her ministry in 2015 with a grant-in-aid of Rs 50 crore out of which Rs 35 crore had been released to Punjab Agro Industries Corporation (PAIC), which was the implementing agency.

Ms Badal, in her letter, said the project had a completion deadline of 2018 but poor planning and slow decision making of the Congress government in the state had resulted in frequent changes in the project components due to which PAIC had repeatedly missed target timelines for completion of the project. Ms Badal, who was replying to the letter from the Chief Minister requesting for release of the fourth and final installment of the Ministry of Food Processing Industry grant for the project, informed the latter that he was not updated about the correct position of the project. She said contrary to the information provided by the Punjab government only four units were operational at the Park.