Qatar, Senegal on cusp of exit as second round begins tomorrow 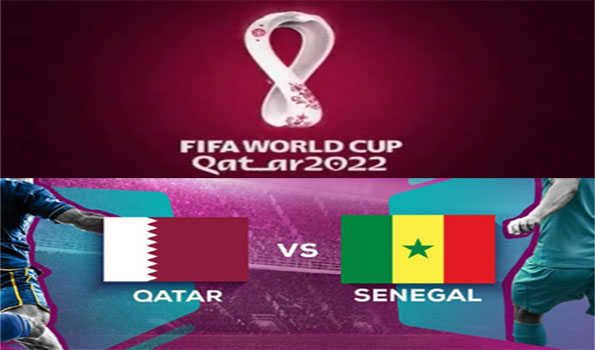 Doha, Nov 24 (UNI) The second round of group games in Groups A and B get underway on Friday with some teams already in danger of an early exit from the World Cup.

England, Iran, Wales, the United States, Senegal, Ecuador, the Netherlands and hosts Qatar get back into action tomorrow.

1) Can Qatar steady their nerves against Senegal

The last time the hosts went out in the group stage was when South Africa failed to make the cut in 2010, but if Qatar lose to Senegal, they would be almost assured of an early exit from their home World Cup.

Qatar looked incredibly nervous in their opening day defeat to Ecuador and coach Felix Sanchez's main task ahead of the game has probably been to give his players the confidence they were lacking last Sunday and remind them of all the work they have done in recent months.

Senegal also lost their opening game and coach Aliou Cisse has to decide whether or not to keep faith with keeper Edouard Mendy, who was at fault for both goals against the Netherlands.

2) Ecuador's defense key against the Netherlands

A win for the Netherlands or Ecuador in Group A's second game would take them into the knockout stages after they both enjoyed 2-0 wins in their opening matches.

The last time Ecuador conceded a goal, it was in the 24th minute of a 1-1 draw with Argentina on March 30, and since then, they have played seven games without keeper Hernan Gallindez picking the ball out of his net.

Ecuador will be hoping that talismanic striker Enner Valencia has recovered from the physical problems which forced him off after he had scored twice against Qatar. Valencia has netted six goals in World Cup finals stages and is vital to his side's attack.

3) Pace and movement in England-US game

England kicked off their World Cup campaign with an impressive 6-2 win over Iran, with their midfield and forwards producing continued movement off the ball and into spaces that the Iran defense was unable to deal with.

That will be the main issue for the US defense on Friday, but expect the Americans to adopt a different strategy to Iran. While Iran sat deep and invited England onto them, the US will look to pressure them high up the field and force errors.

That will test players such as Harry Maguire and John Stones more, but if England get past that first line of pressure, they will find space in their rivals' half, especially if the US tire as they did against Wales.

4) Moore waits for his chance with Wales

Although Gareth Bale grabbed the headlines with his late penalty to save a point for Wales against the US, a lot of the credit has to be given to big striker Kieffer Moore for his second-half contribution.

The striker, who stands almost two meters tall, provided a lot of running and was always a target for long balls from the back, allowing the Welsh to switch their style of play.

That could be vital against an Iran side smarting from Monday's thrashing by England, and who will be looking to salvage some pride.

Expect some meaty challenges for both sides as Wales look to take a step towards qualifying and Iran to bounce back from defeat.