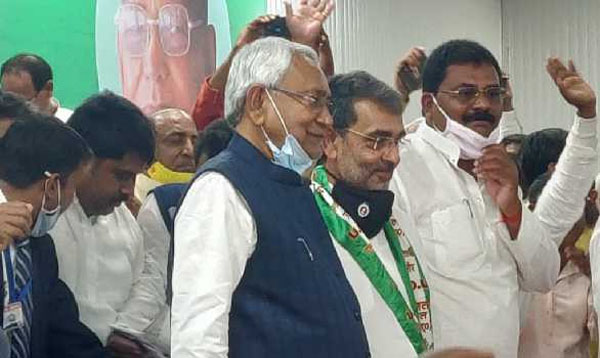 Patna, Mar 14 (UNI) Rashtriya Lok Samta Party president Upendra Kushwaha on Sunday announced the merger of his party with Janata Dal (United).
Mr Kushwaha, after two days meeting of national council of his party here, told media persons that he had taken a decision for merger of RLSP with JD(U) on being authorised by his party to take a final call
on the issue. During the meeting, party leaders expressed their opinion for merger of RLSP with JD(U) and authorised him to take a final decision on the issue, he added.
RLSP leader said that there was no ideological difference of party with JD (U) and he had always respected Chief Minister Nitish Kumar, treating him as his elder brother. People of Bihar had showered blessings on him on several occasions and given opportunity to serve the state as Chief Minister, he said adding that both JD (U) and RLSP had been working hard for upliftment of deprived section of the society. Both the parties were working with the spirit of socialism, he remarked.
Mr Kushwaha said that in new political scenario after Bihar Assembly elections held in 2020, it was felt that there was need for both JD (U) and RLSP to work together from same platform. In Bihar Assembly Elections held in October- November 2020, the mandate was for merger of RLSP and JD(U), he added.
RLSP leader said that Chief Minister Mr Kumar would decide his role in JD(U). He would work hard in JD(U) in any capacity as decided by Mr Kumar, he stressed.
Mr Kushwaha, to a query, said that it would be easy for him to ensure improvement in education scenario in Bihar after merger of RLSP and JD(U). He would continue to work for improving education scenario in the state, he assured.