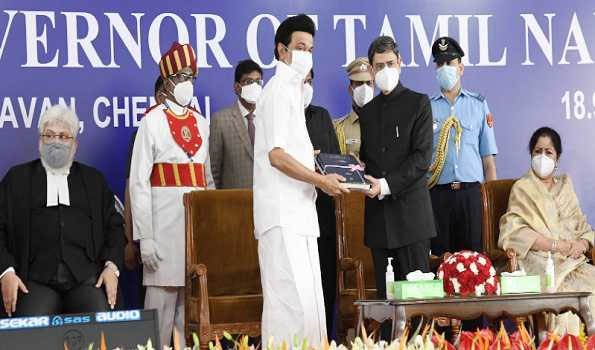 Chennai, Sep 18 (UNI) Former Kerala IPS officer R N Ravi was on Saturday sworn in as the Governor of Tamil Nadu. At a simple function held at the lawns of Raj Bhavan, Madras High Court Chief Justice Sanjib Banerjee administered the oath  of office and secrecy to Mr Ravi.

Mr Ravi is the 25th Governor of Tamil Nadu.

He succeeds Mr Banwarilal Purohit, who was transferred as Government of Punjab.

Mr Ravi had earlier served as Governor of Nagaland and was transferred to Tamil Nadu by President Ram Nath Kovind.

Later, talking to reporters, Mr Ravi said he was happy to become the Governor of Tamil Nadu, which has rich tradition and culture.
He said he would strive for the development of the people of the  State by following the Constitutional framework.