RS adjourned for the day over Delhi violence 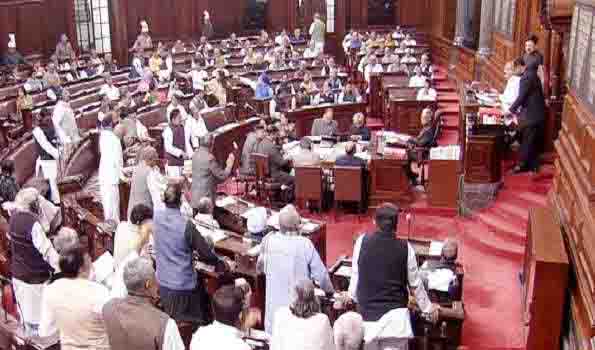 New Delhi,The Rajya Sabha was on Monday adjourned for the day amid Opposition uproar over Delhi violence. When the House reassembled post lunch, members of the Opposition stood up on their seats demanding a discussion on the issue. Amid the din, Deputy Chairman of the Rajya Sabha Harivansh Narayan Singh asked Human Resource Development minister Ramesh Pokhriyal Nishank to move the Central Sanskrit Universities Bill, 2019 which seeks to convert three deemed universities to Central Universities--Rashtriya Sanskrit Sansthan, New Delhi, Lal Bahadur Shastri Rashtriya Sanskrit Vidyapeeth, New Delhi, and Rashtriya Sanskrit Vidyapeeth, Tirupati. As he started speaking on the bill, members of the opposition trooped into the well raising slogans against the government for its failure in checking the violence in Delhi over Citizenship Amendment Act (CAA) and National Register Certificate(NRC). Amid the noisy scenes, the HRD Minister said that Sanskrit is the language of gyaan, vigyaan and anusandhaan (knowledge, science and research).The Minister said that ancient Indians had knowledge on plastic surgery and post-mortem.However, nothing could be heard as the opposition continued with noisy scenes. When his repeated pleas for peace fell on deaf ears, of the Deputy Chairman adjourned the House for the day.