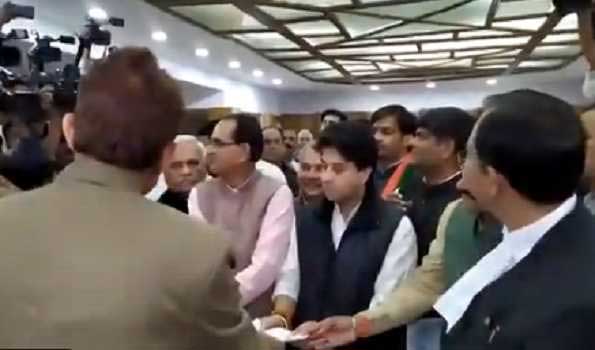 Bhopal,  Bharatiya Janata Party leader Jyotiraditya Scindia submitted his nominations papers here on Friday – the final date for doing so – for election to the Council of States from Madhya Pradesh.The senior politician reached the Assembly premises this afternoon and proffered his documents to Principal Secretary (Vidhan Sabha) AP Singh who has been designated the Returning Officer. He was accompanied by BJP Vice President and erstwhile chief minister Shivraj Singh Chouhan, the party’s state head Vishnu Dutt Sharma and other leaders. Another BJP candidate Sumer Singh Solanki also presented his papers.
From the Congress camp, Mr Phool Singh Baraiya tendered documents. Former chief minister Digvijaya Singh did so on Thursday.The state is witnessing polls for three seats in the upper house. A glance at the numerical strength of the two parties makes it a foregone conclusion that they shall emerge victorious vis-a-vis a seat each but an interesting contest is on the cards for the third position. Scrutiny is scheduled on Monday, the deadline for withdrawal of candidature is Wednesday, voting and counting are scheduled on March 26.The tenures of Rajya Sabha members D Singh, Prabhat Jha and Satyanarayan Jatiya are concluding on April 9.Subsequent to severing ties with the Congress, Mr Scindia arrived in this City of lakes on Thursday to a tumultuous welcome U