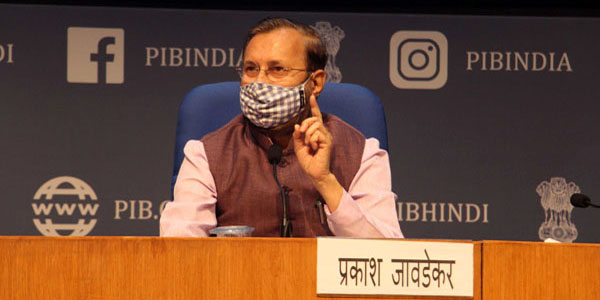 Union Information and Broadcasting Minister Prakash Javadekar on Wednesday said that it is a great day in the history of Indian Air Force as Rafale jets have joined its fleet in Ambala.

These fighter jets will add to the country's fire power and strengthen defence against the enemies.

He further said that the speedy acquisition of these fighters should be attributed to Prime Minister Narendra Modi.

Mr Javadekar said that five out of the 36 jets that have been bought from France have landed here while the remaining will arrive as per the time table.

'Rafale jets join the IAF fleet in Ambala, Haryana today. The new fighter jets will add to India’s firepower & strengthen our defence against enemies. The speedy acquisition of Rafale should definitely be attributed to PM Narendra Modiji,' the Minister said taking to twitter.

'A great day in history of IAF as first 5 Rafale fighters land at Ambala Airbase. Our government has bought total 36 Rafale from France. The remaining fighter aircraft will also land in India as per the timetable,' Javadekar's another tweet read.

The five fighter aircraft, which were flown by Indian Air Force pilots, arrived at Ambala after covering a distance of 7,000 km with air-to-air refueling and a single stop in the United Arab Emirates.

The aircraft will be officially inducted into the IAF in the second half of August.