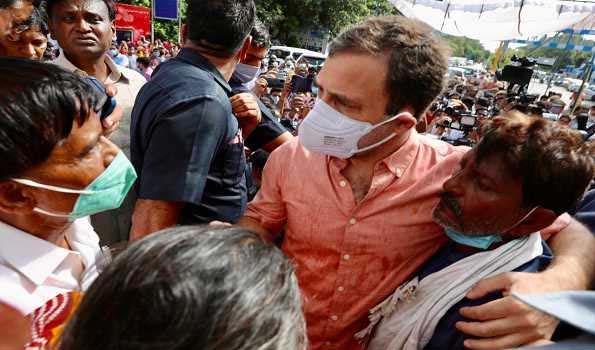 New Delhi, Aug 4 (UNI) Former Congress president Rahul Gandhi on Wednesday met the family of the minor girl, who was allegedly raped, murder, and cremated forcefully in the Cantonment area of Delhi.

The nine-year old Dalit girl was allegedly raped, killed and cremated by her attackers on Sunday.

Mr Gandhi said the family wants justice, and he stands in their full support.

Asked who he holds responsible for the incident, the former Congress president said: "My job is to help them, that is all."

"Tears of her parents say that their daughter, the nation's daughter, should get justice. I am with them on this path to justice," Mr Gandhi said in a tweet.

Delhi Chief Minister Arvind Kejriwal would also be meeting the girl's family today. In a tweet on Tuesday, Mr Kejriwal had demanded capital punishment for the culprits, and inform that he would visit the family.

The nine-year-old girl had gone to fetch water from a water cooler in a crematorium. Later, her body with burn marks was found by the family, who alleged rape and murder. They also said that the assailants forcibly tried to cremate the body.