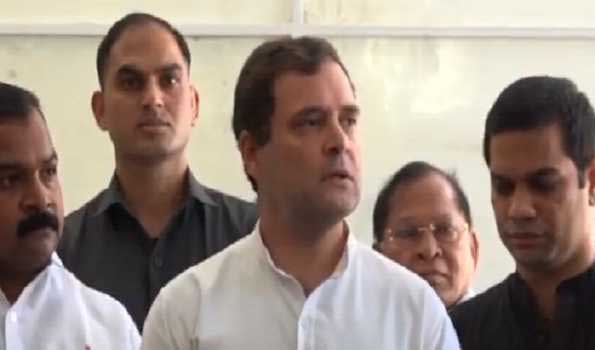 New Delhi, Former Congress president Rahul Gandhi on Tuesday criticised the Lok Sabha Speaker for not allowing the Tamil Nadu MPs to raise the issue of Tamil language, saying it as an 'absolute insult' to people of Tamil Nadu."Yesterday I asked a question about the 50 largest wilful defaulters. The procedure is that if you ask a question then you are allowed a supplementary question. But I did not get answer and not allowed to ask my question", Mr Gandhi told reporters outside Parliament.Stating that he understands that the Lok Sabha Speaker does not want him to speak in the House, the former Congress president said, "I am an MP and I have certain rights that he can't take away. But today the entire Tamil people wanted to ask a supplementary question over Tamil language. This is not about a single person, this is not about Rahul Gandhi, but people of Tamil Nadu and their language. And even they were not allowed to ask the question. This is an absolute insult to the people of Tamil Nadu".

He further said that the people of Tamil Nadu have every single right to defend their language, to belief in their language, and to speak their language.
"The Speaker snatched the rights of the MPs during the debate on language," he criticised and added that "Tamil, which has a history and which is in their DNA, Speaker did not allow them to ask questions".Mr Gandhi said that the Lok Sabha is for all and a discussion should take place."And now a days there are no discussions, no one is allowed to ask questions. It is now one way traffic and it has become a loudspeaker," he charged.Moments after, he tweeted, "the people of Tamil Nadu were disrespected in Parliament today when the Speaker refused to allow a supplementary question on the Tamil language. I strongly protest this injustice done to the Tamil people and the disregard for established practices and traditions of Parliament.