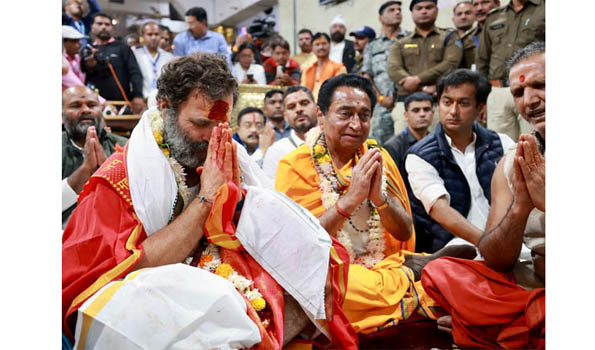 In response to BJP's popular slogan of Jai Shri Ram, Rahul Gandhi rejected many allegations against him by raising the slogan of "Jai Mahakal" in Ujjain, the city of Mahakal and prostrating in the Mahakal temple. Congressmen are excited by the way Rahul, while addressing the public meeting, tried to corner the BJP government by making Lord Shiva and penance the center. Experts are of the view that Congress has hit many targets with one stone by giving soft Hindutva answer to BJP's harsh Hindutva. On the one hand, where the Congress has surrounded those who do politics in the name of Hinduism and Hindutva, on the other hand, it has given a reply to the alleged allegations leveled against it.

Congmen happy with success of Bharat Jodo Yatra in MP
After the successful Bharat Jodo Yatra of 370 kilometers in Madhya Pradesh, not only the state leaders but also the central leaders are in high spirits. The party is considering the public support received in the election state as better for the future. During this visit, there has also been an opportunity to end the existing state-level factionalism. There is a discussion that Rahul Gandhi has made the elderly leaders step in step with the youth leaders of the state and prepared them for a united front against the BJP. The party is expecting better results for itself on the basis of the way the Yatra got support in different areas of Madhya Pradesh.

Rahul ended tussle by making Gehlot, Pilot dance together
The decency and enthusiasm with which Rahul Gandhi has tried to unite the Congress leaders of Rajasthan caught in the grip of internal cold war is being praised all around. The manner in which Rahul Gandhi made Chief Minister Ashok Gehlot and Sachin Pilot dance together at the reception organized by the Congress leaders of Rajasthan while entering the border of Rajasthan from the border of Madhya Pradesh has put a complete stop to many misleading news. By uniting the above two leaders on the lines of Karnataka, Rahul Gandhi has not only increased the confidence and trust within the organization but has also shattered the opposition camp.

Politicians upset due to low vote percentage in Delhi
Despite all the efforts of the Election Commission in the Delhi MCD elections, the low turnout of voters has become a cause of concern for the political parties. MCD is occupied by BJP, in such a way some people are calling it a vote for change, while BJP people are expecting better results for themselves by calling it a vote of voter's satisfaction. Although the Congress is trying to make the fight triangular this time, a direct contest between the BJP and AAP is visible in most of the seats.

All eyes are on attitude of Muslim voters in Gujarat
Due to the presence of Aam Aadmi Party and Owaisi's party in the Gujarat assembly elections, there is a disturbance in the Congress camp. There is a possibility of changing the election result due to burglary in the minority vote bank. Although the Congress strategists are claiming that the voter has understood the purpose of both the above parties, so there is less possibility of vote splitting, yet if it happens, it will have a profound impact on the Gujarat election result.