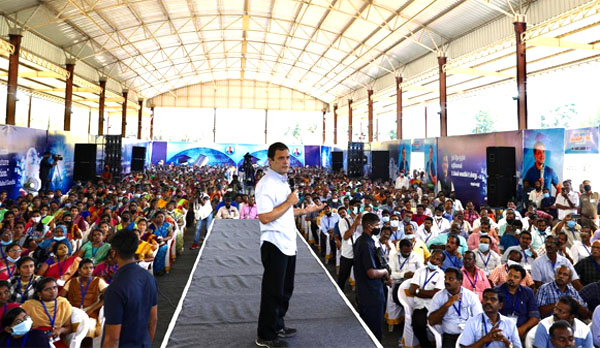 Tirunelveli, Feb 28 (UNI) Equating with his experience in Parliament, Congress leader Rahul Gandhi shared a lighter moment during an interaction with college professors at St Xavier's College in this southern district of Tamil Nadu on Sunday

During the inter-action, one of the professors sought to raise a question when his mike went off.

However, a few seconds later, when the mike was restored, Rahul intervened, paused for a moment and asked the person, 'do you know what happened to your mike'.

'It went off..similarly it happened to me in Parliament', Rahul said, sending the audience into peels of laughter.

'Whenever I rose to speak in Parliament the mike will go off', he said, with a laugh.

Rahul, who is on his second leg of electioneering in Tamil Nadu for the April six Assembly polls, said once the Congress returns to power the educational assistance scheme would be revived.

Earlier, Rahul Gandhi offered prayers at the ancient Shiva shrine of Lord Nellaiappar temple, where he was accorded the traditional temple honours.