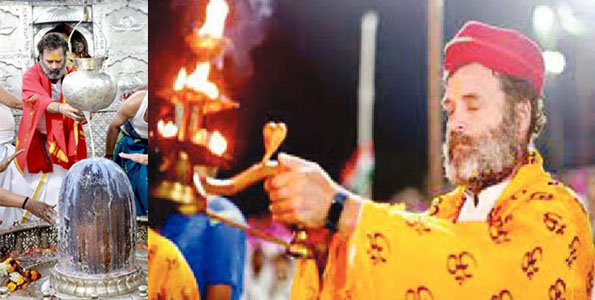 Ujjain (MP), (UNI) The Centre in general and Prime Minister Narendra Modi in particular came under withering fire on Tuesday as erstwhile Congress president Rahul Gandhi relentlessly continued a multi-pronged assault by accusing the dispensation of favouritism vis-à-vis tycoons, cold-shouldering the peasantry, ignoring the youth and muzzling the Fourth Estate.

Addressing a mammoth gathering in this ancient holy city after offering ritual worship at the world-renowned Mahakaleshwar shrine, Mr Gandhi repeatedly laid emphasis on the word ‘tapasya’ and underlined the manner in which the cultivator, labourer, carpenter, etc were doing penance each passing day by sincerely toiling for the nation.

Commencing his 25-minute-long speech with three cries of ‘Jai Mahakal’, Mr Gandhi averred, “A handful of persons worship the Prime Minister therefore entire India’s wealth and resources are being handed over to them through privatisation. Thousands of tillers with whom I shook hands during the Bharat Jodo Yatra asked me why they do not receive adequate fertiliser and insurance amounts. The Yatra is India’s journey and not of the Congress alone. The Bhagavadgita unambiguously states that penance is to be undertaken without hankering for outcome but it is the Government of India’s duty to provide for the populace. Demonetisation and GST are actually weapons that broke the system’s backbone in addition to aggravating the unemployment crisis. Restriction of small traders’ cash flow is disastrous.”

In the Madhya Pradesh context, he said that the Professional Examination Board inconsistencies constituted a massive injustice to the aspirations of youth.