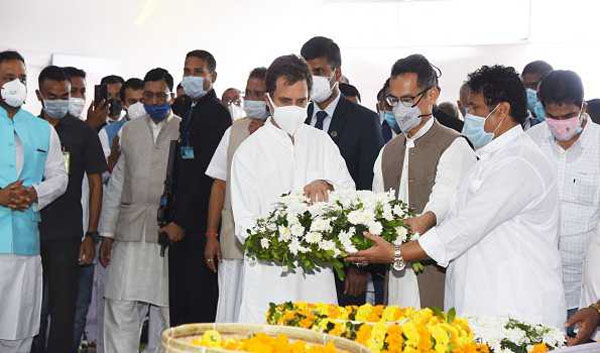 Talking to media persons after paying his last respects to Gogoi here, Gandhi said, “He was not just a leader of Assam, but a national leader. He inspired us by bringing people together.”

“I spent many hours talking to Tarun Gogoiji. He was my teacher, my guru. He explained to me like perhaps no one else could the complexity, the beauty of Assam. It is a personal loss for me,” he said.

“Gogoiji never spoke about himself. He only spoke about the state and its people. Assam is a complicated and difficult state, and he did a great job in bringing everyone together,” Gandhi said.

He also expressed his grief at the death of another veteran Congress leader Ahmed Patel this morning and said, with his demise, Congress has lost a pillar.

On whether the party will face any challenge with the demise of Gogoi ahead of next year’s state polls, Gandhi said, “It will not be a challenge as Gogoiji had trained his juniors well. But of course, it would have been easier had he been around.”

Gandhi flew to Guwahati in a special flight and drove straight to Srimanta Sankardev Kalakshetra, where Gogoi's body has been laid in state.

He laid a wreath and lit incense sticks, and stood with folded hands and bowed head for few minutes in front of the coffin inside which Gogoi's mortal remains were kept.

Accompanied by Gogoi’s son Gaurav, Gandhi visited their residence at the Minister’s Colony and offered his condolences to Gogoi’s widow, Dolly Gogoi, and other family members.Gandhi later flew out of the city later in the noon.

Gogoi had breathed his last at the Gauhati Medical College and Hospital on November 23 after developing post-COVID complications.

His last rites will be performed here tomorrow.