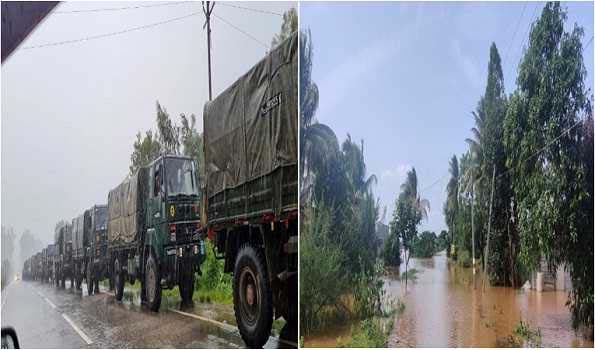 Pune, Jul 24 (UNI) With the recovery of more bodies, the death toll in rain-related incidents in Maharashtra climbed to 136 on Saturday.
Several people have lost their lives as heavy downpour led to multiple landslides in the state over the past two days.
Around 84,452 people under the Pune division were shifted to safer places today as rain continued to wreak havoc across the state.
As per a PIB release, the Army has launched `Operation Varsha 21' for flood relief and rescue work in the state. It has deployed a total of 15 relief and rescue teams comprising troops from the Aundh Military Station Pune, and Bombay Engineer Group based in affected areas of Pune.
Meanwhile, the India Meteorological Department (IMD) had issued a fresh 'red alert' for Satara, forecasting "extremely heavy rainfall" in the next 24 hours in the hilly `ghat' areas of this Western Maharashtra district where some 30 persons are missing after landslides.
The Met department also issued an `orange alert' for Pune and Kolhapur districts. The region is being battered by incessant rains for the last two days.
Extremely heavy rainfall is likely to occur at isolated places in the ghat sections of the Satara district, the IMD said.
Maharashtra Chief Minister Uddhav Thackeray has already announced ex-gratia of 5 lakh each for the kin of those who lost their lives in the landslides.
Prime Minister Narendra Modi announced Rs 2 lakh ex-gratia for the next of kin of those who died in Raigad due to landslides. Rs 50,000 would be given to the injured, the PMO said in a tweet.
Western Naval Command of the Indian Navy has also mobilised resources to provide assistance to state and District administrations of affected areas in Maharashtra, Karnataka and Goa that are reeling under flooding of both urban and rural areas due to heavy rain.