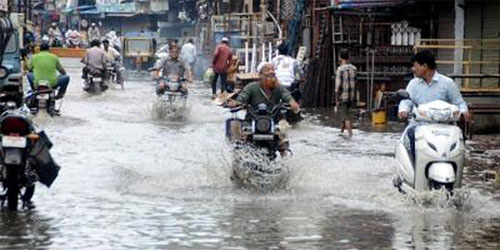 There has been record rainfall in the capital Bhopal from Friday morning to Saturday morning. After 14 years in Bhopal, 215.4 millimeters of rainfall occurred in 24 hours. With this, after 14 years, the record for the highest rainfall in a single day in August has also been broken. City received 215.4 mm of rain in 24 hours. Earlier, on August 14, 2006, Bhopal received 299 mm of rain.

After heavy downpour, the water has started flowing on VIP road as the Upper Lake reached almost full tank level. The water level in Upper Lake has reached 1665.80 feet, while the full tank level (FTL) is 1666.80 feet. That means after filling one foot of water, it will be full level. Habibganj under bridge was flooded from waist to top only on Friday afternoon, causing many vehicles to get stuck there. One car was almost drowned and traffic was severely affected. Due to heavy rains for 24 hours in the capital, the life line of Bhopal, Upper Lake, has filled up to the brim. Due to this, for the first time in the season, six gates of Bhadbhada dam and two gates of Kaliasot Dam have been opened.