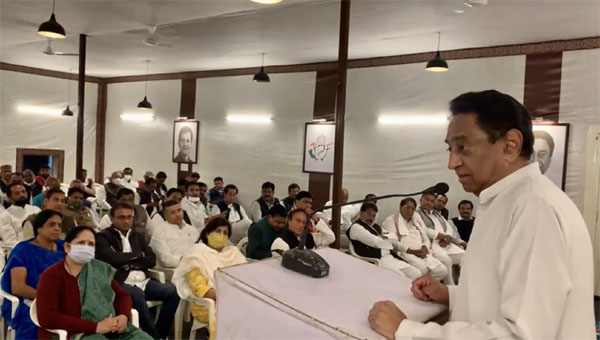 Chronicle Reporter, Bhopal-Congress Legislature Party meeting was held at the residence of former Chief Minister of the state on Monday. The Congress Legislature Party,s strategy was discussed in this meeting on the budget session which was started on Tuesday. In which it has been decided that all the MLAs will raise Issues of public interest effectively in House.

Addressing the meeting, former Chief Minister and Leader of Opposition Kamal Nath said that Governor,s address was held, there was a sense of issues of public interest, neither was there talk of oppression on women, nor was there talk on plight of farmers, nor was there talk on employment. But through this an attempt was made to mislead. Many times the name of the Prime Minister is taken in it. Every class is troubled today. At first, our sisters were not safe, now even our innocent girls are not safe. On the 24th, I will respond to the Governor,s address. The Congress Legislature Party is very strong in strength. We should give more and more time to the house, participate in the discussion, raise issues of public interest prominently. Our MLA sister Kalavati Bhuria has been tried to intimidate, but we are not one to be scared. We will fight BJP's hooliganism in solidarity. Many Congress MLAs gave their views during the meeting. They gave their views on many issues related to the House. Tributes were paid to 54 people who died in the Sidhi bus accident.

Nath said that today, a true public servant is one who stands in public sorrow and happiness all the time. Today,s youth is very intelligent, he cannot become blind, he recognizes the truth. Today politics is more based on regional issues, now the public cannot be misled in the name of national and international issues. In this session, the BJP government will also work to mislead the people through the budget, we all have to participate in the discussion and make this anti-people government to stand in stockade. He said that all the MLAs should take up the issues of public interest in their area, development of the state on priority. No section is safe in the BJP government today, all are upset, misleading the public in the name of false declarations. The farmer of our country is on demonstration and the BJP government of Madhya Pradesh, which describes itself as farmer-friendly, is also suppressing the farmers in the state, it is supporting these black laws, we have to spread this thing to the people. Today, there are incidents of cruelty with sisters and daughters every day, nieces are not safe under the rule of maternal uncle. Today, the price of petrol-diesel is skyrocketing, the government is not reducing tax to give relief to the public, we have to raise all these issues from the House to the road. The meeting was also addressed by Dr. Govind Singh, NP Prajapati. Former minister Kamleshwar Patel raised the issue of giving less compensation to the dead families from the government for the Sidhi bus accident and blamed the Shivraj government for this painful accident.