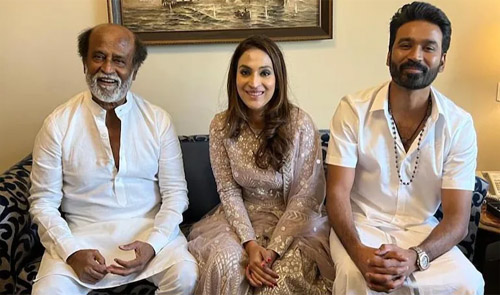 One of the most loved couples of South, Dhanush and Aishwaryaa Rajinikanth announced separation after 18 years of marriage on January 17, 2022. The news came as a huge shock to many people and it was also reported that Rajinikanth is also upset with Dhanush and Aishwaryaa's decision. Now a new set of reports suggest that the Superstar wants his daughter to 'mend her marriage' with Dhanush and has been talking to her regarding the same.
According to reports, Rajinikanth is badly affected by Dhanush and Aishwaryaa's split and is trying hard to mend things between them.
A source told Wion, "Rajini sir has taken his daughter’s break up very badly. He keeps insisting that the separation is temporary. He has been urging his daughter to mend her marriage."
Dhanush's father Kasthuri Raja termed their separation as just a 'family quarrel' and also said that the couple has not filed for divorce yet. In an interview to a Tamil daily, Kasthuri Raja said, "It is a family quarrel that usually takes place between a married couple."
Both the sides of Dhanush and Aishwaryaa's family are reportedly trying to make things better for the family. However, it is to be awaited and watch if they will get back together or not. On the other side, it is to be noticed that Aishwaryaa has still not changed her last name on Instagram, she still goes after Dhanush as her last name.