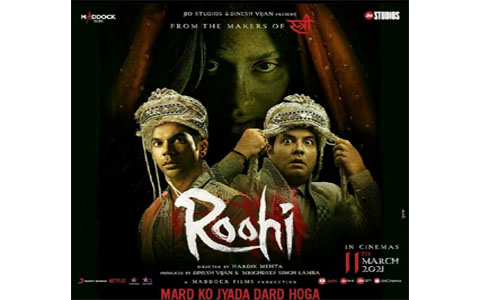 Ahead of the trailer release, Rajkummar Rao and Janhvi Kapoor have shared the first look posters of their upcoming film Roohi. The film will mark the directorial debut of Hardik Mehta and it will be released on big screens on March 11, 2021. The film has been written by Mrighdeep Singh Lamba. After the massive success of Rajkummar Rao and Shraddha Kapoor starrer Stree, the team has come together to create another interesting horror-comedy Roohi. Now, Janhvi has taken to her Instagram handle to share the first look poster featuring her along with Rajkummar and Varun Sharma.
Well, apart from Janhvi and Rajkummar, Varun Sharma is also an integral part of the film. In the posters, the actress can be seen as a ghost bride while co-stars Rajkummar and Varun can be seen as grooms. The posters include a tag line: Mard Ko Zyada Dard Hoga. While sharing the posters, Janhvi wrote, “Aaiyega zaroor Iss Bhootiya Shaadi mein. #RoohiTrailerOutAt12pm, stay tuned. #Roohi in cinemas 11th March 2021!”
Earlier, Both Janhvi and Rajkummar had shared a teaser of the film and captioned it, "Iss Bhootiya Shaadi mein aapka swagat hai! #MagicOfCinemaReturns; movie releases 11th March."
Roohi has been produced by Dinesh Vijan and Mrighdeep Singh Lamba. Before being named Roohi, the film underwent several title changes. Earlier, in an interview with Hindustan Times, Janhvi Kapoor had said that the her character in Roohi is “one of the most exciting, challenging, complicated, physically demanding and emotionally taxing roles that I’ve had the privilege of doing.”