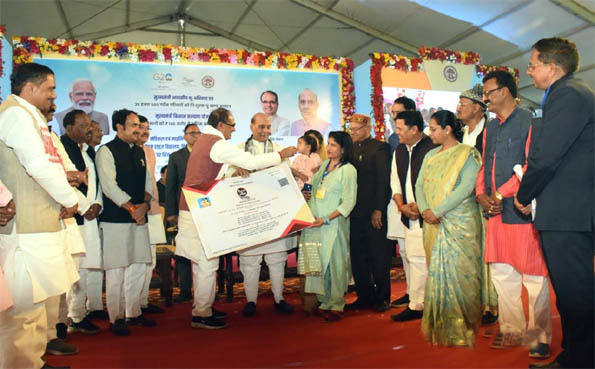 Bhopal: Union Defence Minister Shri Rajnath Singh and Chief Minister Shri Shivraj Singh Chouhan visited Gadhara village in Singrauli district and distributed free land pattas to 57 poor families under the Mukhyamantri Awasiya Bhu-Adhikar Yojana. They met and interacted with the beneficiaries.
Shri Singh congratulated the Chief Minister and the state government for the benevolent work of distribution of residential patta to the landless and homeless. He said that the welfare of the poor is the commitment of our government under the leadership of Prime Minister Shri Narendra Modi. The welfare of the poor is our mantra and also our inspiration. In Madhya Pradesh, Chief Minister Shri Chouhan is working with this basic mantra, he deserves thanks and congratulations.
Chouhan said that today I am very happy to see the expression of happiness on the faces of the beneficiaries of the Mukhyamantri Awasiya Bhu-Adhikar Yojana. I am happy to see happiness on the faces of children. The Chief Minister said that every person has a right on a piece of land to live on. Residential pattas will be given to every poor family of the state. The Chief Minister said that the poor families living on other's land always had the fear of eviction. Similarly, the members of the poor families who had built houses on government land were increasing but their houses were not. To get rid of all these problems, Mukhyamantri Awasiya Bhu-Adhikaar Yojna is being implemented in the state.

Both leaders enjoyed local cuisine
Singh and Chief Minister Shri Chouhan sat on the ground with the beneficiaries and tasted Bathue ka saag, chane ki bhaji, bajra ki roti, haath poi roti, til laddoos, kodo rice and local delicacies. He said that self-satisfaction is achieved by providing food to the beneficiaries with love. With their affection, the heart is filled with joy and happiness. State’s Minister of Minerals and in-charge of the district Shri Brijendra Pratap Singh and MLA Devsar Shri Subhash Verma also had food.

Beneficiaries are happy after getting ownership right
More than 25 thousand families, who were waiting for land to build houses for years, became proud land owners after getting pattas from the Mukhya Mantri Awasiya Yojana. Their joy was apparent from their beaming faces after receiving the title deeds of the residential land. Beneficiary of Gadhara village Smt. Meena Baiga said that now I will also get the benefit of Pradhan Mantri Awas Yojana and now my dream of building a house will be fulfilled. Shri Babulal Panika said that the Chief Minister has made us land owners by giving residential pattas. Till now we were living in temporary houses built on other’s land.