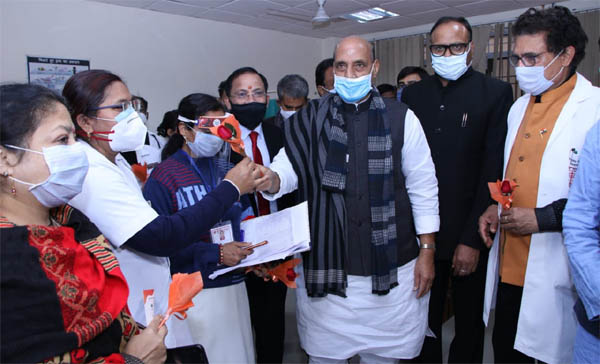 Lucknow, (UNI) Defence minister Rajnath while expressing gratitude towards the defence forces for their service to the nation, has appreciated their courageous role during the Indo-Chinese border issue last year.

Mr Singh was speaking after laying the foundation for a new building of the Command Hospital here on Saturday in presence of Uttar Pradesh Chief Minister Yogi Adityanath, Chief of the Army Staff General (COAS) MM Naravane and General Officer Commanding in Chief (GOC-in-C), Central Command Lieutenant General IS Ghuman.

He said that at the advent of the pandemic, India was faced with a shortage of testing labs, masks, PPE kits and ventilators. But, the nation overcame all obstacles ensuring adequate supply of medical infrastructure not just for Indians, but for the whole world.

Mr Singh, who is MP from Lucknow, added that while medical infrastructure was an essential part of the pandemic response, none of it would have helped without the bravery and commitment of doctors, paramedical staff and other COVID Warriors who risked their lives.

Expressing gratitude towards the efforts of doctors, paramedical staff and other COVID Warriors, he said that their conduct is an illustration of why doctors are considered next to God across the world.

Defence minister said that COVID Vaccination has begun today. Two indigenous vaccines are available in India and 4 other vaccines are to come. He said that the vaccines will be provided not just to Indians but to all. This, he added, is an illustration of the philosophy of ‘Vasudaiva Kutumbakam’ and the message that the whole world is a family, which India's conduct gave to the world.

Mr Singh recalled India's history in medicine which shows concern not just for humans but all living beings. He also remembered Mahatma Gandhi's philosophy Swacch Bharat which preached equal concern for all life and has been focused upon by the current government. Highlighting the government's focus on Health he said the government has taken care to scale up medical infrastructure. He added that the government is also increasing government expenditure on health and has undertaken several essential. Mr Singh said, Ayushman Bharat has fulfilled a great need for healthcare. He mentioned that more than 1.5 crore people have been benefitted by the scheme which is unparalleled across the world.

Mr Singh congratulated the authorities for starting the construction of the news command hospital building on the time and assured the gathering that any obstacle to the project will be resolved in coordination with state and civil authorities. He said he was confident of the full cooperation of UP Chief Minister Yogi Adityanath in this regard.

He said the construction of the New Command Hospital building addresses a long standing need of the people.

He also commended the authorities for relocating rather than cutting trees while clearing land for the building. Mr Singh said that the COVID-19 pandemic had created difficult circumstances for all of us. He appreciated the leadership of Prime Minister Narendra Modi in taking on the challenge of the pandemic and leading India through it.

Mr Singh also congratulated the people for the ongoing ‘Swarnim Vijay Varsh’ celebrations, which commemorate India's great victory in the 1971 Indo-Pak War. He said the courage and valour of defence forces in 1971 was a source of immense pride for the whole country.

Addressing the gathering UP Chief Minister Shri Yogi Adityanath welcomed RM Rajnath Singh to Lucknow. He thanked armed forces, veterans and their families for their service to the nation and applauded the bravery and valour of the Indian army. He appreciated the close coordination between the armed forces and civil authorities in COVID Management. He said this was essential in protecting UP in the wake of the crisis. He added that the discipline, organisation and commitment of the armed forces inspires as all to more ahead.

Chief Minister Yogi Adityanath reiterated the goal of taking cooperation between defence and civil administration forward. He assured full support of the state authorities in providing better health services through such projects

The new building of Command Hospital is spread over 40 acre of land and to be constructed with an estimated cost of Rs 425 Crore. The building will have six blocks of four wings varying from three to nine storeys. All blocks are inter connected with skyways independent of the main patient activity areas. The building complex will also cater for parking of 750 Cars in addition to vertical circulation in the form of adequate numbers of elevators and ramps. It will house state of the art facilities with all specialties and sub specialties notably cardiology with a modern Interventional Catheterisation Lab, Modular Operation Theatres with one hybrid Operation Theatre, State of the Art Nephrology and Dialysis Centre and Composite Oncology Centre.