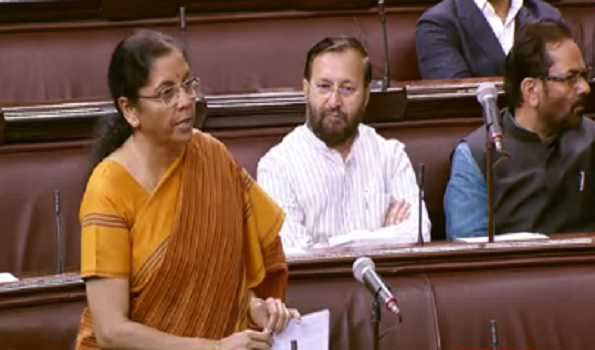 <p>New Delhi,  The Rajya Sabha on Thursday passed the Insolvency and Bankruptcy Code (IBC) (Amendment) Bill, 2020 with voice votes. <br /> <br /> The Bill seeks to amend the Insolvency and Bankruptcy Code (IBC) so that successful bidders of insolvent companies are ring-fenced from any risk of criminal proceedings for offences committed by previous promoters of the companies concerned.<br /> <br /> Finance Minister Nirmala Sitharaman sought the cooperation of the members to pass the Bill in the House.<br /> <br /> The Bill was declared passed by Tiruchi Shiva, who was in the chair. <br /> <br /> The Insolvency and Bankruptcy Code, which came into force in 2016, was amended thrice in the past and also Ordinance brought in thrice.<br /> <br /> Stating that there was no motives, in her reply in Upper House, Ms Sitharaman said, 'The amendments are periodic but brought thoughtfully and in sync with requirements of time. It is in letter and spirit with the Supreme Court&rsquo;s judgment.'<br /> <br /> The Minister appreciated National Company Law Appellate Tribunal (NCLAT) for its performance in disposing off the cases. She said that the NCLAT has disposed off a total of 64,523 cases till January 31, 2020, of which 43,102 cases belonging to Insolvency and Bankruptcy Code were sorted out. <br /> <br /> On home buyers, she said that the government is seized to take care of their interests. 'Since July when I presented the Budget last year and this year&rsquo;s Budget, several rounds of discussions have taken place as how to take care of home buyers interests and complete and the incomplete and languishing projects.' <br /> <br /> On MSMEs, Ms Sitharaman said she had directed the officials to clear the dues in an effort that the enterprises do not face issue of liquidity crisis. <br /> <br /> She said nearly 80 per cent dues of MSMEs are cleared.<br /> <br