Rameshwar Sharma to welcome Digvijaya who announced to play Ramdhun 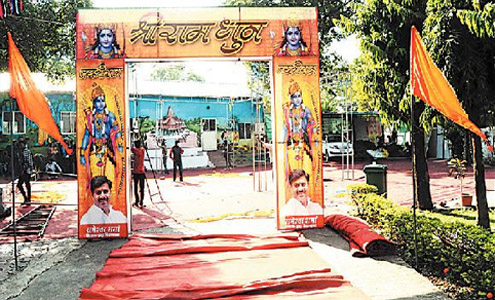 Welcome gate prepared; halwa puri to be served to all participants

Chronicle Reporter, Bhopal
In Bhopal, there has been a sudden entry of halwa-puri in the 'knee breaking politics' of BJP and Congress. Former Chief Minister Digvijaya Singh had announced to play Ramdhun on November 24 at the residence of BJP MLA Rameshwar. After this, the welcome gate is being prepared by former Protem Speaker and MLA Rameshwar Sharma at his residence Yuva Sadan in Malviya Nagar.
Jai Shri Ram is written on it along with Ramdhun as well as the picture of Lord Rama. Tents are being set up in the campus to accommodate about 1000 people. Along with this, preparations are being made to distribute puri, vegetables and pudding to be distributed as the prasad. Actually, Rameshwar Sharma had said in the statement that if Congressmen come, they will break their knees. On this Digvijaya Singh had challenged I will come, break my knees. After this, Rameshwar Sharma is suddenly seen coming on the backfoot. After the statement of Digvijaya Singh, he has made preparations to welcome him on his arrival.
On this matter, MLA Rameshwar Sharma said that he is preparing for Ramdhun. There can be no greater joy and happier moment in our life than the name of Lord Rama and Ramdhun. Sharma said that those who kept opposing Lord Ram throughout their life, kept calling Lord Ram imaginary, those who kept opposing Lord Ram temple. Those who kept on crying when the Babri Masjid structure was demolished. Today he is coming to perform Ramdhun for the sake of Rambhakti. There cannot be a greater moment of joy and happiness than this for Rameshwar Sharma. He is welcome. Congratulations. We are busy in welcoming him and making elaborate preparations for Ramdhun.

The controversy started from here
A video of former Protem Speaker and MLA Rameshwar Sharma surfaced a few days ago. While addressing the people of Katkheda village of Huzur Vidhan Sabha, Rameshwar Sharma was heard saying in the video that if any Congressman comes, break his knee. During this, he also took the name of Digvijaya Singh. After this, former Chief Minister Digvijaya Singh had targeted Rameshwar Sharma by tweeting that he would visit the Gandhi statue on November 24 and go to Rameshwar Sharma's house to perform Ramdhun, if he had the guts to break my knees.