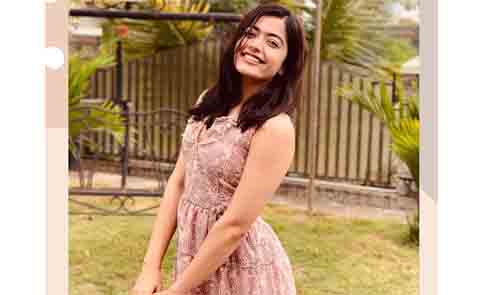 The first look poster of Rashmika Mandanna's upcoming film Pushpa has been revealed. The Sukumar directorial has Allu Arjun as the lead actor.
Stylish star Allu Arjun and Rashmika Mandanna-starrer Pushpa is one of the anticipated films of Tollywood. Rashmika will play a de-glam role as a Rayalaseema woman in the film. The makers revealed Rashmika's first look from the film on Wednesday, September 29.  According to the poster, Rashmika plays the role of Srivalli in the film. She is Pushpa Raj's (played by Allu Arjun) love interest. In the poster, Rashmika is seen prepping up for a ceremony as she dresses up in what appears to be traditional attire. She carries an intense and serious look on her face.
Pushpa is a story based on the red sanders smuggling in the Seshachalam Hills of the Rayalaseema region of Andhra Pradesh. Directed by Sukumar, Pushpa will see Allu Arjun playing the role of a sandalwood smuggler named Pushpa Raj. Apart from Allu Arjun and Rashmika, Pushpa marks the Telugu debut of Malayalam actor Fahadh Faasil. The film also stars Anasuya, Jagapathi Babu, Prakash Raj, Dhananjay, Sunil, Harish Uthaman and Vennela Kishore in other important roles. Pushpa is scheduled to release in two parts. The first part Pushpa: The Rise is slated to release in this Christmas, December 25. The flick will be released in Telugu, Kannada, Tamil, Malayalam and Hindi.
The first song Daakko Daakko Meka has clocked over 54 million views on Youtube. Devi Sri Prasad is composing the music for the film, marking his ninth collaboration with filmmaker Sukumar. Pushpa: The Rise and Aamir Khan’s Laal Singh Chaddha will clash at the box office.