Rashmika Mandanna is all smiles as she heads to Hyderabad for the next shoot schedule of her first Pan-India project, -Pushpa 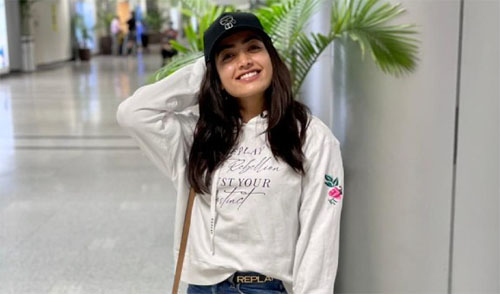 National crush Rashmika Mandanna has been juggling in between shoots for her upcoming movies. A month before, she had been in Mumbai to prep for her upcoming Bollywood debut movie, Mission Majnu, co-starring Sidharth Malhotra.
A source close to the actress reveals, Rashmika will now soon start shooting for her first Pan-India film, 'Pushpa' soon. After that, she will head on to Lucknow for Mission Majnu.

The source further adds, This is quite an exciting time for Rashmika, her first music video Top Tucker has become an overnight hit, and she has multiple films, from almost all languages lined up.
The actress donned upon a simple look as she travelled from Mumbai to Hyderabad for the shoot. She paired a white hoodie with high-waist jeans, paired with golden sneakers and a chic black cap.

The actress has a very strong lineup of projects under her belt, at the moment. She has reportedly signed two Bollywood films, and with Pushpa, she is now just one-step closer to become a Pan-India Star.