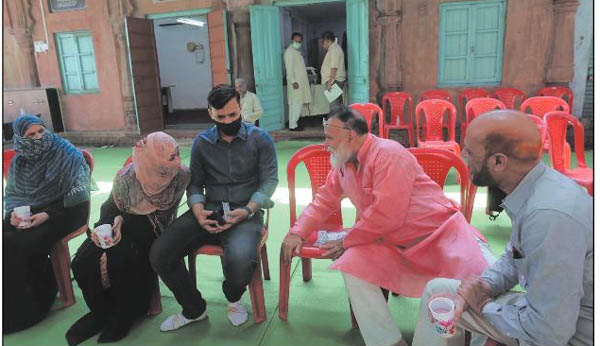 Chronicle Reporter, Bhopal
The corona graph is growing rapidly in Madhya Pradesh. In the last 24 hours, there have been 4,043 positive cases recorded. The deterioration of conditions can be gauged from the fact that the positivity rate has reached 12%. The death toll has risen to 4086. It also includes 13 deaths on 6 April. After Bhopal, Indore, Jabalpur and Gwalior, more than 100 cases have been found in Barwani, Ujjain and Umaria.
In the past 24 hours, Bhopal witnessed as many as 618 new cases, while Indore saw 86 cases. In Indore, four corona patients died on Tuesday. To prevent infection, the government may impose two-day lockdown in 13 districts on Saturdays besides Sundays.
The government is considering measures to involve people in the drive to curb Corona infection. Chief Minister Shivraj Singh Chouhan said that ‘Mein Corona Volunteer’ campaign has been started. This means that people should register themselves as Corona Volunteers. They can call 181 and register at mp.mygov.in. These volunteers can register themselves as Vaccination Volunteers and Medical Facility Volunteers apart from government system.
Along with this, mask awareness volunteers will work to prevent, motivate, urge people to wear masks and make masks available. Mohalla Toli organizations will be helpful in voluntary home quarantine and institutional quarantine. Interested persons can register for these activities on CM Helpline and 181.
Chouhan said that when humanity faces a crisis, then the whole humanity becomes one shedding all differences. No political party, no caste, no religion.
I appeal to all brethren to participate in this effort to stop Corona infection, so that together we can stop the pace of this infection. The Swasthya Agraha programme is being started with this appeal.
Chief Minister Chouhan said that the government is essentially providing better treatment and medical facilities.

CSP Anil Tripathi’s wife succumbs
CSP Nishatpura Anil Tripathi's wife Seema Tripathi finally succumbed after 13 days of treatment due to corona infection. She was infected at an engagement ceremony. On March 24, she was admitted to the hospital after her corona report came back positive.
After being admitted to the Chirayu hospital, the doctors kept her out of the ICU as the condition improved. In two days, when the oxygen level started decreasing, she was again admitted to the ICU ward. After this, her condition deteriorated and she died in the early hours of Tuesday.
56-year-old Seema was a resident of 9 Ashoka Chinar, Fortune City. She was a housewife. She was cremated at Bhadbhada Vishram Ghat on Tuesday afternoon. Son Ankush lit the pyre wearing a PPE kit. During this period more than 50 police officers of the district including DIG Bhopal, SP South were present.