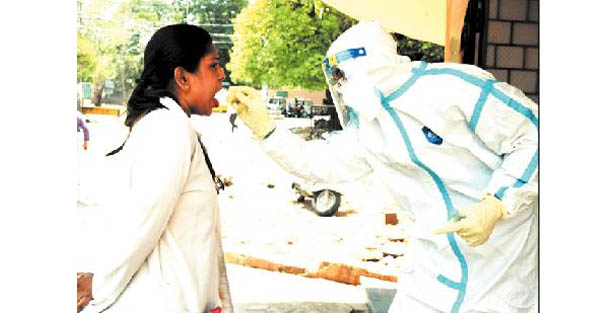 Chronicle Reporter, Bhopal
In Madhya Pradesh, 6 thousand 489 new positives have been found in 24 hours. At the same time, 37 people have died of corona. The state's positivity rate reached 16% for the first time. That is, every sixth sample is reported positive. Apart from former organisation secretary Makhan Singh, the report of 6 employees has come positive in the BJP state office in Bhopal. In view of this, office secretary Raghavendra Sharma has banned entry of outsiders in the state office for the next 10 days. Maa Bijasan Devi Dham at Salkanpur in Sehore district has been closed till 21 April. Devotees will not be able to make darshan even on Chaitra Navratra.
A record 923 cases have been reported in Indore in one day. 824 have been found infected in Bhopal, 497 in Gwalior and 469 in Jabalpur. The maximum number of 45 deaths in the state occurred on 23 September 2020. Yesterday, on April 11, there were 37 deaths in 24 hours. Breaking the community transition is a big challenge before the government.
Meanwhile, Chief Minister Shivraj Singh Chouhan has said that media has an important role in making society aware. To prevent corona infection, it is necessary to raise public awareness to such a level that every person is motivated to behave in a manner that is helpful in preventing corona.
Chief Minister Chouhan appealed to media representatives for all possible cooperation. Chief Minister Chouhan was interacting with journalists from different districts through video conference at the “Swasthta Agraha” programme organised at Minto Hall.
Chief Minister Chouhan said that the people have to be motivated for using mask, keeping a safe distance, frequent hand washing and vaccination. This fight cannot be fought by the government alone. The Corona Volunteer campaign has been launched with the aim of engaging the people and involving them in this battle.
A presentation on Covid management was also given at the press conference. Additional Chief Secretary Health Mohammad Suleman informed the journalists about the status of the major Covid affected states in the country, positivity rate, number of new cases, beds in hospitals, status of other resources and the ongoing vaccination in the state.
In the presentation, the instructions issued by the Home Department for crowd control, arrangements being made for Covid control were also given. It was told in the presentation that the rate of RTPCR has been fixed at Rs 700 per test and Rapid Antigen test rate at Rs 300. The rate of CT scan will also not exceed Rs 3000 per scan.