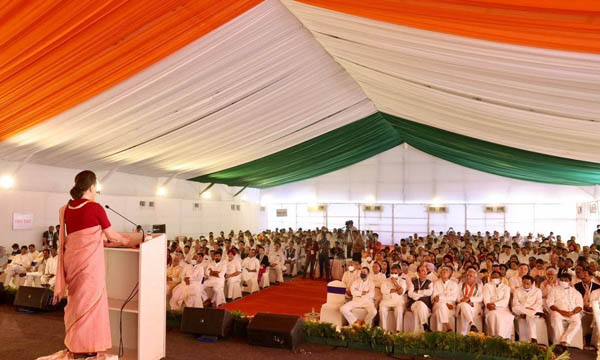 Udaipur, May 13 (UNI) Congress President Sonia Gandhi on Friday asked party members to repay their debt to the party, and made it clear that the path for revival of Congress will not be easy, but it's time for action. Addressing the inaugural session of the 'Nav Sankalp Shivir' of the party, the Congress President slammed the Narendra Modi government for keeping people in a permanent state of polarisation, and said economic progress cannot come in such situation. Sonia Gandhi also called upon party leaders to come united and speak in one voice. Repeating her message that she gave at the Congress Working Committee meet, she said, "This is a time when we have to surrender our personal interests for the party. Party has given us a lot it is time to repay the debt". "I request all of you to express your opinions openly. But only one message should go outside, the message of unity... We will not be finished by our failure. Nor are we unaware of the challenges ahead and the hope that people have with us," she said. "We are here to take united decision. We will bring our party back in to national politics in the same way as it has always been and as expected by people of the country. "We are doing introspection but let's decide when we go out of here we will have new confidence, energey and dedication, " she added. Sonia Gandhi said the meeting provides an opportunity to discuss the numerous challenges the country is facing as a result of policies of BJP, RSS and it's affiliates. "This is a meet for both Chintan over national issues and aatmchintan (self introspection) about our party..." she said. Slamming the Bharatiya Janata Party (BJP) government, the Congress President said, "By now it has become abundantly and painfully clear what Prime Minister Modi and his colleagues really mean by their slogan 'Maximum governance, minimum government'. It means keeping the country in a state of permanent polarisation, compelling people to live in a constant state of fear and insecurity". "It means viciously targeting, victimising, and often brutalising minorities who are an integral part of our society and equal citizens of our republic. It means using our society's age-old plurality to divide us and subverting the carefully nurtured idea of unity in diversity." The Congress President accused the BJP of threatening and intimidating political opponents, maligning their reputation, jailing them on flimsy pretexts, misusing investigating agencies and eroding independence and professionalism of all institutions. She also slammed the BJP for its repeated attacks on first Prime Minister Jawaharlal Nehru. "It means glorifying the killers of Mahatma Gandhi and their ideologues. It means the blatant undermining of our nation's constitution and its pillars - justice, liberty, equality, fraternity and secularism," she said. She also accused the government of turning a blind eye towards weaker sections, specially Dalits, Adivasis and women. "It means more anti-slogans, diversionary tactics, and utter silence on the part of an ever so eloquent Prime Minister when the healing touch is most needed. It is not just undermining of our long cherished values but also pitting them at grave risk. The fire of hatred that is being ignited has taken a heavy toll on the people, on their lives. This is having serious social consequences. Much more serious than we can even imagine," she said adding that a vast majority of Indians want to live in atmosphere of peace, harmony. "BJP and it's cohorts and surrogates want to keep people in a state of perpetual frenzy and conflict. They constantly provoke, instigate and inflame." The Congress President asked party members to combat it. "We have to combat this growing virus of divisiveness that is being maliciously and mischievously spread. This we must do at all costs. it is imperative to sustain high economic growth to provide employment". She said the intolerance and bigotry shakes the very foundation of economic growth, and slammed the government over growing unemployment. "For the first time it appears vast number of people have simply given up hope for getting a job," she said. "Whatever support central government has been able to provide to people has been on account of UPA programs, to name just two of them - MNREGA and National Food Securty Act," she said. Sonia Gandhi also mentioned the protests against the three farm laws, and said, "Promise made to farmers when they withdrew their agitation is still to be fulfilled." She also mentioned the rising inflation, and privatisation of public sector enterprises. The three-day Nav Sankalp Shivir will end on May 15.