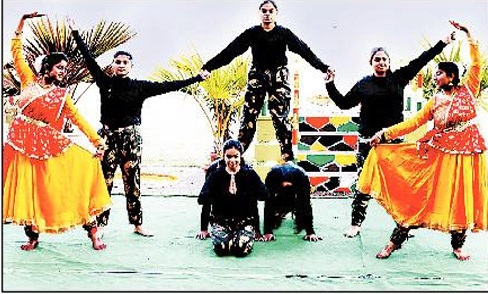 BSSS College of the city celebrated the 73rd Republic Day, with enthusiasm and gaiety. At 8 am in the college premises under the open sky, the cadets of 4MP Battalion BSSS NCC, volunteers of NSS, college staff and in the presence of some students, Dr Father John P.J., Principal of the institute, hoisted the flag and took the salute as the NCC cadets marched past. After a spectacular parade of NCC cadets at the command of the Senior Under Officer, the tricolor was given a national salute. On this occasion, the cadets expressed their patriotism by singing patriotic songs. The women cadets displayed the military prowess of women through a splendid performance of heroic dance.
As the college had organized many competitions, under the Amrit Mahotsav of Independence, Dr Father John PJ gave away the prizes to the winners. The following are the winners of the various competitions:
In craft competition - First - Nishika Jain, Second - Kanupriya Agarwal and Disha Maheshwari, Third - Ishita Borkar
Meri kalam se (Writing Competition) First – Divyangana Vaish, Second – Anoushka Jain, Third – Nisha Mamtani
As a dedication to mutual unity and brotherhood for the progress and integrity of our country, while maintaining the protocol of Covid- 19, the students released colorful balloons in the sky, symbolically representing the progress and growth of our country.