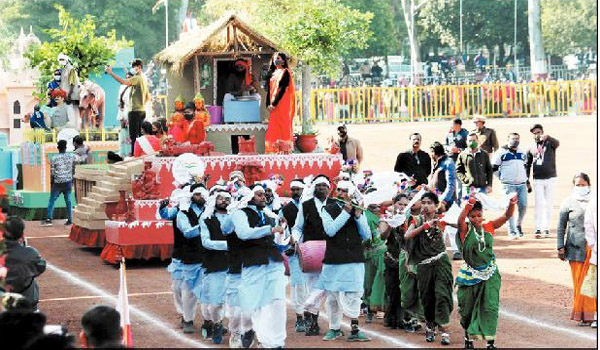 Chronicle Reporter, Bhopal
The 73rd Republic Day was celebrated in the state with full gaiety and patriotic fervour. The national flag was hoisted in the programmes organized at the district headquarters, and cultural programme full of patriotism were presented along with attractive parade. The message of Chief Minister Shri Shivraj Singh Chouhan was read out to the people of the state. Developmental tableaux of various departments were taken out and government officials and employees were also rewarded for outstanding performance. Republic Day was celebrated with solemnity in all the urban bodies, district panchayat and village panchayat headquarters of the state.

Unity in diversity is the culture of our country: Governor
Governor Mangubhai Patel has said that unity in diversity is the culture of our country. Diversity is the heritage of our country. It is our duty to develop and protect our culture, literature and art. He said that a treasure trove of moral values ??and excellence of life is hidden in our culture and literature. Mangubhai Patel was addressing the Lokrang programme organized on Republic Day and the inauguration ceremony of Rabindra Sabhagam Kendra. Chief Minister Shri Shivraj Singh Chouhan presided over the programme.
Governor Shri Patel has said that our cultural diversity is the heritage of our country in the true sense; it is the duty of all the countrymen to ensure its constant conservation and development. Cultural events highlight our folk values, artistic richness and familiarize the youth and future generations with our cultural heritage. Cultural programmes of various forms of art strengthen the emotional unity inherent in our cultural diversity by presenting the moral values ??and beliefs of culture.

Make MP a prosperous and developed state
Governor Patel has said that Sabka Saath, Sabka Vikas, Sabka Vishwas and Sabka Prayas are the basic mantras of Madhya Pradesh in the 21st century. He has called upon the citizens to take a pledge to make Madhya Pradesh a self-reliant, prosperous and developed state with the participation of people and system on the auspicious occasion of Republic Day. He paid floral tribute to those who laid down their lives for the freedom and sovereignty of the country. Governor Patel was addressing the people of the state at the Republic Day celebrations organised at Lal Parade Ground.