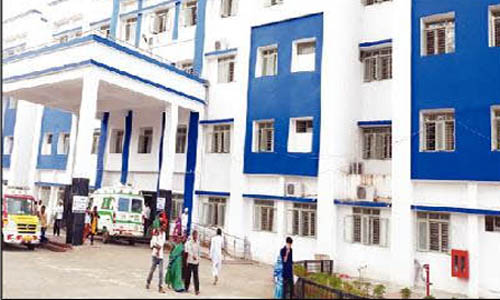 Chronicle Reporter, Bhopal
For two months, the district hospital is operating without an ENT doctor. Patients are returning every day without getting treatment. The hospital needs an ENT doctor.
According to the information received, Dr. Shubhangi Barbude, a nose, ear, throat specialist, was appointed on contract for one year in the district hospital. The doctor's term ended on October 24. After this, a new doctor has not been posted in the hospital yet. Due to non-appointment of doctor, patients coming to the hospital for treatment are facing problems. Every day about half a dozen people coming for treatment of nose, ear, throat, but due to lack of doctor, they have to return disappointed without getting treatment. Poor people from far flung areas come to the district hospital for treatment but people have to suffer a lot due to the absence of a doctor. Patients come to the hospital every day, but when they come to know that there is no nose, ear, throat doctor, then they have to return disappointed. How long will the appointment of the doctor take, the officials are also refraining from saying anything, because the issue of appointment is at the government level.
Dr. Bhatt comes for medical certificate
Medical certificate is made every Tuesday in the district hospital. Dr. Bhatt posted in CMHO office is called to make medical treatment of nose, ear and throat patients. Dr. Bhatt is only called for the medical board, but there is no doctor to treat. Earlier, Dr. Bhatt used to treat nose, ear, throat in the district hospital, but his duty was shifted to CMHO office and he has been given the responsibility of district vaccination officer. The condition of the hospital is that the nose, ears, throat treatment was available earlier. But except for the district hospital, there is no nose, ear, throat doctor even in the private sector now.
Patients increase in winter season
During winter season, patients with complaints of nose, ear, throat are more exposed. Difficulties have to be faced due to lack of treatment. In the winter season, many people start having trouble in nose, ear, throat due to cold, but even in this season, the absence of a doctor has become a big problem.
Nose, ear, throat specialist was appointed on contract for one year. After the end of the term, new doctor have not come yet. Dr. Bhatt is being called for the medical board.
Dr. Ashok Baranga
Civil Surgeon, Betul