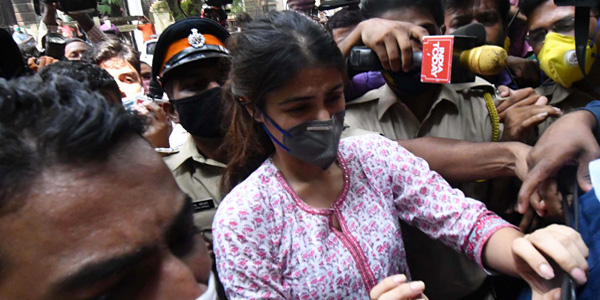 Rhea Chakraborty, prime accused in the drugs angle linked to Hindi cinema actor Sushant Singh Rajput’s death, was interrogated by the Narcotics Control Bureau (NCB) for nearly six hours on Sunday and will be questioned again on Monday.

Although no details were immediately officially available, sources said Rhea had admitted to procuring drugs but maintained that she did not consume herself. The actress said she was procuring drugs for Sushant, sources added.

In a parallel development, a team of Central Bureau of Investigation (CBI) went to the Cooper Hospital on Sunday where Sushant Singh’s post mortem was conducted and questioned doctors there.

The sources said the suicide theory of Sushant Singh seemed to be crumbling although nothing could be officially confirmed.

Earlier in the morning, the late actor’s house staff member Dipesh Sawant who was arrested on Saturday night by the NCB, in the drugs angle, has been remanded to NCB custody till September 9.

Sawant was arrested by the NCB after day-long interrogation, He was produced in the court Sunday morning which remanded him to NCB custody till September 9.

This brings to eight the number of people arrested by the NCB so far in connection with the case.

Rhea who reached the NCB office about an hour late, has not sought any anticipatory bail and her lawyer Satish Maneshinde has said she is ready for arrest. Rhea’s lawyer described it as a ‘’witch hunt;’’ and said she is innocent and that was why she had not approached any court for anticipatory bail.

"Rhea Chakraborty is ready for arrest... it's a witch hunt. If loving someone is a crime, she'll face consequences.Being innocent, she hasn't approached any court for anticipatory bail in all cases foisted by Bihar Police with CBI, Enforcement Directorate and NCB, " Mr Maneshinde, said in a statement on Saturday.

Rhea’s father Indrajit Chakraborty had issued a statement on Saturday expressing anger and disappointment at the arrest of his son, Showik.

Lt Col (retd) Indrajit Chakraborty said “Congratulations India, you have arrested my son, I’m sure next on the line is my daughter and I don’t know who is next thereafter. You have effectively demolished a middle-class family. But of course, for the sake of justice, everything is justified. Jai Hind.”

The NCB took the investigations after it received an information from the ED that certain chats of procurement, consumption and transportation of narcotics have surfaced.

The probe agency has so far discovered 59 grams of curated marijuana from two men identified as Abbas Lakhani and Karan Arora.

The 34-year-old actor, hailing from state of Bihar, was found dead in his apartment in Mumbai on June 14, this year. The investigations into his death were transferred to the CBI from the Mumbai police by the Supreme Court. So far, all the arrests are directly or indirectly liked to the drugs angle.