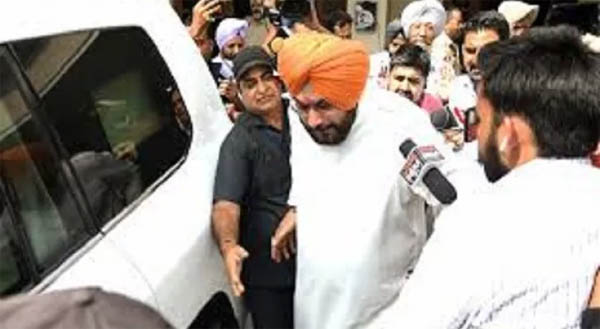 Patiala, May 20 (UNI) Cricketer-turned-politician and former Punjab Congress President Navjot Singh Sidhu surrendered in Patiala court on Friday in a road rage case. A senior police officer who was present in the court to take possession of the convicted politician said, “Navjot Sidhu has surrendered and will be taken for a medical check-up before going to jail.” Earlier, in the morning Sidhu urged the Supreme Court to give him a few weeks time to surrender to undergo the one year jail term awarded to him in a 1988 road rage case. Senior advocate Dr Abhishek Manu Singhvi pleaded Sidhu's case to Justice A M Khanwilkar and Justice Sanjay Kishan Kaul but they said a special bench has to be assembled to consider his plea. "He will surrender. But he wants a few weeks time to settle up his medical health issues. Give me some time please. Please consider it," Dr Singhvi pleaded. The counsel for Punjab opposed the plea and said that 34 years does not mean the crime is over. Now that the judgement is pronounced, they again want three-four weeks time. "I am saying I will surrender. It's your discretion to consider," Dr Singhvi said. The Supreme Court asked Dr Singhvi to place a formal application. "File this and mention it before the Chief Justice's court, then we will see it." The case dates back to December 27, 1988 when Sidhu, then a cricketer, assaulted Gurnam Singh of Patiala and he died after the attack. A Sessions Court Judge of Patiala had on September 22, 1999 acquitted Sidhu and his associate due to lack of evidence. Later, the Punjab and Haryana High Court convicted Sidhu and sentenced him to three years in jail but the Supreme Court in 2018 let him off with a mere fine. Subsequently, the family members of the deceased moved the apex court by filing a review petition and sought a modification of the 2018 judgement.